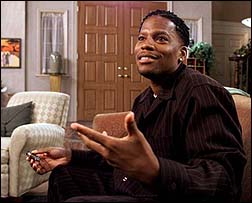 (CelebrityAccess News Service) – Actor/comedian D.L. Hughley ("The Hughleys," "Original Kings of Comedy") has signed on to host "Liar," a U.S. adaptation of the hit comedy game show of the same name created by FremantleMedia's company Talkback for the BBC. The project is currently in pre-production and is being piloted by CBS for early 2004. "Liar" is a co-production between FremantleMedia North America ("American Idol," "Cupid") and Reveille Productions ("The Restaurant," "Coupling"), with Ben Silverman and David Lyle serving as executive producers, respectively, and H.T. Owens ("The Restaurant," "Nashville Star") as co-executive producer in association with 3 Arts Entertainment. ICM brokered the deal for Hughley.

"Liar" is the perfect 21st Century vehicle for D.L. Hughley's amazing talent. I am thrilled to be bringing this exciting franchise to CBS," Silverman stated.

Added Lyle, "'Liar' is a wonderful coming together of a game show structure with unpredictable, freewheeling standup comedy. With Hughley's inspired ad lib humor as the central catalyst, we intend for 'Liar' to move the game show platform into new and exciting territory."

Hughley humorously remarked to his hosting of "Liar" with, "I am excited to be doing a show about the very thing at which I am an expert."

Currently airing in five markets worldwide, "Liar" was launched successfully on BBC UK in August. The British show is a hilarious verbal give-and-take between six contestants and an inquiring audience. This repartee is mc'd by the host, who also provides humorous commentary. All of the contestants claim to have had a common experience, but five of them are liars. The audience's goal is to weed out the posers, one by one, and identify the contestant who had the experience. If the audience succeeds, they share a cash prize; if they don't, the best liar standing takes home all of the loot. –Jane Cohen and Bob Grossweiner