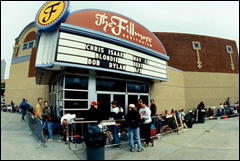 DENVER (CelebrityAccess MediaWire) — With the news coming just last week that former Live Nation promoters Don Strasburg and Brent Fedrizzi had been hired away by AEG Live, it seems like business as usual already in the highly competitive market.

Live Nation’s Jason Miller, who had booked Denver shows for eight years with House of Blues before moving to Los Angeles, has returned to the region, already closing pending deals to bring Bob Dylan to the Fillmore and Paul Simon to Magness Arena. He’s also in talks to bring The Who to the Pepsi Center later this year.

“It’s heads down and book away,” Miller told the Rocky Mountain News. “My No. 1 priority is Denver. Live Nation is going to continue to lead the market. There’s a possibility that Perry Lavoisne, a longtime Detroit-based Live Nation talent buyer, will also help in the market.”

Strasburg is reportedly already at work for AEG Live, but Fedrizzi apparently has to sit out the duration of a non-compete clause in his Live Nation agreement before he gets moving. There is no word on what projects the pair might focus on first.

“It’s a huge shake-up,” Doug Kauffman, co-owner of independent Denver promoter Nobody in Particular Presents, told the paper. “Those guys (Fedrizzi and Strasburg) did a real good job over there. I’m surprised to see them leave.”

For them to break off from Live Nation “must mean a lot is going on that nobody’s talking about,” Kauffman continued. “I’m just glad that NIPP is an independent promoter and not at the mercy of any of the politics that go on with these huge corporate concert promoters.” –by CelebrityAccess Staff Writers