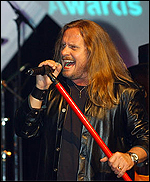 SALISBURY, MD (CelebrityAccess MediaWire) — More than a month after Lynyrd Skynyrd was forced to cancel an Independence Day concert at Arthur W. Perdue Stadium in Salisbury, Maryland, organizers are still struggling to get refunds into the hands of all ticketholders.

The band announced that they will provide refunds, and the Delmarva Shorebirds minor league baseball team and parent company Comcast-Spectacor have said they will also make donations to ensure fans receive their money back.

“Our fans are what keep us going,” Skynyrd frontman Johnny Van Zant told the Delmarva Daily Times. “We have very loyal fans and are also loyal to them.”

Concert promoter Giant Productions refunded nearly 75 percent of the tickets during the last half of July, but had a deadline of July 31st for ticketholders to claim their money.

Shorebirds General Manager Steve Yaros told the paper that nearly 1,000 people have not yet claimed their $35 ticket refunds.

“The outstanding issue we had was a lot of people were from out of state because the concert was on the fourth,” Yaros said. “(We) just wanted to make sure everyone had adequate time to get a refund.”

Refunds will now be offered through January 5, 2007 by visiting the stadium office.

The band has also said that they plan to return to the area and perform in the near future. –by CelebrityAccess Staff Writers