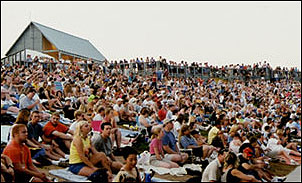 DTE Energy Music Theatre and its sister venue, Meadow Brook Music Festival on the campus of Oakland University, will combine for the first time to let concertgoers to pick their own plan Summer Series schedule of more than 80 shows for the summer of 2003. The popular "pick-your-own plan" Summer Series allows patrons to create their own ticket package by purchasing any three shows from the series schedule and receiving free tickets to three select "bonus" concerts of their choice from the two amphitheatres' concert assortment featuring the best in rock, classical, alternative, adult contemporary, pop, country and rhythm &blues.

The program's variety is greatly extended this summer with the inclusion of the Meadow Brook Music Festival line-up for the first time ever, including its Detroit Symphony Orchestra dates. Also, for the first time, Summer Series pavilion ticket-buyers will be able to choose their three bonus shows in the pavilion, while supplies last, from the list of free shows. In past years, this was limited to lawn tickets.

"We continually strive to improve the concert-going experience at our venues and the introduction of the entire Meadow Brook schedule to our Summer Series and the addition of free pavilion tickets to our Bonus events is another way of doing so," said Tom Wilson, president and CEO of Palace Sports and Entertainment (PS&E). "Summer Series tickets have been a long-standing tradition in this area and we are confident this year's enhancements make them even more popular."

House of Blues Concerts and Scene Magazine, an Ohio entertainment publication, have
agreed to a naming rights deal to change the 4,800-capacity Nautica Pavilion to Scene
Pavilion. Last year the amphitheater underwent a $5 million renovation.

But a war might be brewing. Competitor Clear Channel Entertainment books the Tower City Amphitheater. The Cleveland Plain Dealer reports, "Michael Belkin is on a mission," said a concert club owner who got a call from the Clear Channel executive last week. "He's telling
everybody what he's going to do. He's threatening to pull his ads."

In another venue name change, the San Bernardino, CA Board of Supervisors approved changing the name of the Glen Helen Blockbuster Pavilion to "the Hyundai Pavilion at Glen Helen."

Clear Channel Entertainment, operators of the venue in Devore, CA, signed a naming-rights agreement with the Hyundai dealers of Los Angeles and Orange counties last month. According to the San Bernardino County Sun, the county will get $120,000 per year for the next five years, plus 100 announcements per year on Clear Channel-owned radio stations.