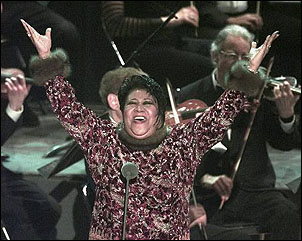 Aretha Franklin has made a stunning decision to commence what she is referring to as her final tour, tentatively titled, "Aretha Sings Her Musical History," in advance of the release of a new album of all new material this fall. She will continue to perform select dates in the future, but the tour – which will hit the road throughout the spring, summer and fall – will be the last major full-scale tour schedule of her career.

Initial dates will be announced in the weeks ahead for "Aretha Sings Her Musical History," whose costumes will be exclusively designed by Luther Vandross, Valentino, Halston, Donna Karan and Bill Blass. Vandross has designed two knockout gowns for the tour, which were designed in celebration of their friendship and as an extension of his creative ability.

In an unusual move, Franklin is putting out the word that there will be open auditions for dancers in the tour troupe. The auditions will be for male and female dancers, ages 18-35, and will be held in Detroit during the second week in May. The location will be publicly announced just prior to the audition dates. Those interested should come prepared with videos, brochures, resume, photography and so on.

DOSWELL, Va. (AP) — Two people suffered gunshot wounds at the BET College Hip-Hop Fest at the Paramount's Kings Dominion in Doswell, Va., on Saturday. A man in being held in connection with the shooting.

Police say the shooting took place during an altercation in a parking lot after the festival ended. Authorities say the shooting probably was triggered by a vehicle collision in the lot after the concert. A spokesman for the Hanover County Sheriff's Office says the two victims and the alleged shooter knew each other. The suspect, David Gleason McKoy, is being held without bond facing several charges, including malicious wounding.

Among the acts that were listed as performing at the event were Fabolous, Keith Murray, Cam'ron and The Diplomats. About 20,000 people attended the event.

OXFORD, Ohio (AP) — City manager Jane Howington asked Miami University to cancel an April 23 concert by rapper 50 Cent because of public safety concerns, but the school says the show will go on.

The concert is sold out, and a ticket only could be obtained with a Miami University student identification, university spokeswoman Holly Wissing said Friday.

Campus police and officials say no tickets will be sold at the door, alcohol won't be allowed and there will be adequate security.

Howington is concerned that violence could occur if fans come from other cities and find that no tickets are available.

In an April 2 letter to Miami President James Garland, Howington said she sees the potential for a "public safety nightmare."

"This event is putting the entire community at risk, an action that I most vehemently oppose," Howington wrote. "If any problems occur, Miami will be accountable in answering to the community, the student body and their parents."

50 Cent will perform in Millett Hall, the university's basketball arena, about 30 miles northwest of Cincinnati.

Lt. Andrew Powers of the Miami campus police said he's talked with security personnel and police at locations where 50 Cent has performed in the past month and found little evidence that audiences are prone to violence.

"Given current world events, which is causing insurmountable visa issues, WOMAD USA will not be taking place at Marymoor Park or any other location in the United States in 2003," WOMAD artistic director Thomas Brooman said Wednesday.

This is the second consecutive year that the event, co-founded by Brooman and rock musician Peter Gabriel, has been canceled because of visa problems.

When The Dead members – Mickey Hart, Bill Kreutzmann, Phil Lesh, and Bob Weir – tour together for their first summer tour since Jerry Garcia's death, they will be joined on the road by such luminaries as Bob Dylan, Willie Nelson, Steve Winwood (who will perform with their own bands as well as sit in and perform with The Dead during each of their respective shows), and Grateful Dead songwriter Robert Hunter. Also performing as a new member of The Dead is Joan Osborne (CelebrityAccess, April 6, 2003).

Kicking off their four-hour, two-set Summer Getaway Tour on June 15, it will include Grateful Dead classics like "Fire on the Mountain," "Uncle John's Band" and "Box of Rain" in addition to new material. Winwood will join the band June 17-25 while Willie Nelson & Family co-headline June 27-July 4, where Nelson's last date on the tour will take place at his famous 4th of July picnic in Austin, Texas.

The tour's second leg runs July 29 – August 10 with Dylan co-headlining. This marks the his first time playing with the former Grateful Dead members since he and group toured together on a sold-out stadium tour in 1987.

Rounding out The Dead are keyboardists Jeff Chimenti and Rob Barraco and lead guitarist Jimmy Herring.

For many, the name Hagfish may not ring many bells, but for those that have been initiated, it brings to mind powerful pop-punk tunes that could rival Sum 41, Blink-182 and Good Charlotte. Hagfish released Buick Men, their first length album, in 1993 through Dragon Street Records. Many of the songs would be re-released later on London Records "…Rocks Your Lame Ass!" to an audience eagerly awaiting more. The audience was appeased with "Stamp," the single from the album. The popularity of the song, and of
the authoring band spread. They toured relentlessly with a virtual cornucopia of punk rock's top acts. The list of bands that Hagfish has played with reads like a venerable who's who in punk rock; ALL, Save Ferris, Mike Watt, The Offspring, Zeke, Gas Huffer, Face to Face,Snuff, Mighty Mighty Bosstones, NoFX, Reverend Horton Heat, Supersuckers,
Swingin' Utters, Bad Brains, and many more. One of Hagfish's final tours were as direct support to Everclear on the "Sparkle and Fade" tour.

Many fans were heartbroken when, in 1998, Hagfish decided to hang-up the towel. Five long years later and the band is ready to pick up the towel, dust off the drum-set, tune up their guitars and play. Hagfish will be announcing their reunion and return to performance at The Gypsy Tea Room on April 18th. The decision to tour again came after playing a Christmas day show in Dallas in 2002. "It felt great to be in front of the fans again," claims George Reagan, singer for Hagfish, "it made me remember why we
started doing this more than ten years ago. The reaction to the old songs, fans just singing along, it was like we never even left."

To kick off their return, Hagfish will be supporting Lagwagon on 8 West Coast dates. Additionally, they will be playing the Stockage Festival (June 27 – 29) at The Starlight in Fort Collins, CO, with All, Descendants,
Armstrong and more. They will also be recording new material, and hope to release a new album in the new future.

Worley Entertains Crowd at the Pentagon

Worley, introduced by Defense Secretary Donald H. Rumsfeld, sang at a concert in the Pentagon courtyard on Wednesday that will be broadcast to U.S. service members around the world.

"Have You Forgotten?" which is atop the Billboard charts, focuses on the Sept. 11 terrorist attacks as a reason to support U.S. military action in Afghanistan and Iraq.

Worley defended the song as "pro-American" and "pro-military." As for critics who call the song "pro-war," Worley said if that means he supports President Bush and the recent military action, then the title fits.

The singer said his visit with U.S. soldiers in Afghanistan inspired "Have You Forgotten?"

"I wrote this song because I wanted to do something just to pay back the soldiers for what they've done for me and for us as a country," Worley said in introducing the song.

Americans need to remember the troops that are missing in action, Worley said.

"Let's celebrate the ones we found and let's pray constantly for those that we haven't," the singer told the crowd. "I guarantee you there's good American soldiers on the ground right now looking for those other ones."

Live performances are scheduled through Oct. 10 outside the "Today" show's street-level studio at Rockefeller Center in midtown Manhattan.

Additional performances will be announced throughout the season, NBC said this week.