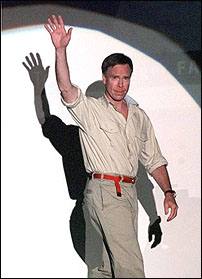 "We are pleased to expand our relationship with Clear Channel Entertainment and believe that this new program is a great fit for our company," said Peter Connolly. "By featuring and promoting up-and-coming live music on a local level during the popular summer concert season, the Tommy Jeans Stage program stays true to our long-standing history of bringing fashion and music together in a meaningful and relevant way."

As part of the agreement, Tommy Hilfiger is also able to produce fashion shows and/or other brand related programs on the Tommy Jeans Stages throughout the summer concert season. Additional on-site benefits include the opportunity to provide branded apparel to performing musical artists, partner with retailers, display and distribute fragrance samples, run commercials on video monitors, place advertisements in official concert program books and post signage at designated areas throughout the venues. The majority of the Clear Channel Entertainment summer concert season lineup including Tommy Jeans Stage acts will be announced throughout May.

"Affiliating Tommy Hilfiger's name with the plaza stages at 10 of our amphitheaters adds prestige to the summer concert season at those venues, as well as legitimacy and new audiences to the emerging musical acts who perform on the Tommy Jeans Stages," stated Bruce Eskowitz, president, National Sales &Marketing, Clear Channel Entertainment. "Together we will continue to enhance the live concert experience for music fans across the nation."