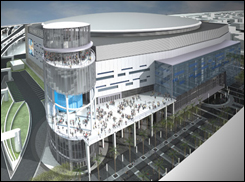 ORLANDO (CelebrityAccess MediaWire) — Plans for providing the Orlando Magic with a new home took a step forward last week as new details of the proposed $480 arena were revealed.

According to a report by the Orlando Sentinel, the plans under consideration would prove to be a marked departure from the team's current home. The proposed arena would be more than double the size of the current facility and include four restaurants and pubs as well as retail space.

The exterior of the planned structure will be imposing, including a 20,000 square-foot glass entryway and a 151-foot glass tower.

"We'd like people, as they come to this building for the first time, to be blown away," architect John Shreve told the Sentinel "At the same time, we want it to have a sense of what Orlando is."

Despite the size, the new arena, or Event Center, as its called, will only feature about 1,000 more seats than the Magic's current home which currently comes in at 17,282 when configured for a game.

More significant gains have been realized in the skybox department where the new arena will feature 56 luxury sweets, more than double the current arena's 26 but the pricing for this incipient luxury is yet to be determined. – CelebrityAccess Staff Writers