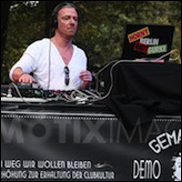 MUNICH, Germany (VIP NEWS) — Hundreds of German DJs demonstrated last week in front of the local offices of the German collection society GEMA in Dortmund and Munich against what they consider new and unfair DJ licensing fees.

In Dortmund, the demonstration was spontaneous with some 100 DJs protesting; while in Munich some 500 DJs and members of the German Piracy party, who oppose existing German copyright laws, demonstrated in front of the City Hall on the Munich Marien-Platz.

“DJs are obliged by law to register with GEMA and pay licenses for their copies,” explains GEMA spokesperson Franco Walther. “If they don’t do this they are liable for damages up to 100% of the actual fee.”

Michael Mayer, co-owner of Kompakt, an electronic music label in Cologne, is outraged by the new GEMA fees. “It is simply scandalous that none of the money generated by the DJs reaches the musicians whose music is being played in the clubs,” he says. “This fuels my suspicion that these new rates, which I consider to be utterly absurd, serve the sole purpose of lining only the most successful GEMA authors' pockets.”

“Nobody knows to whom the money is paid,” says Caba Kroll, a DJ who organizes the annual DJ Meeting in Dortmund. “I doubt very much that the authors of the actual music played get paid. That means, for example, electro-DJs who only play their own music do not get any of the money back they pay to GEMA.”

But Walther disputes this saying that “income from the discotheques is distributed by GEMA according to a statistically secured monitoring system to the members.”

Berlin house and techno DJ Oliver Koletzki readily accepts the notion of copyright but believes the new fee is onerous. “As a matter of principle, I support copyrights and also the exploitation of distribution and performance rights," he says, "hoowever, I think the rate of 13 cents is too high and that there is no justification for the additional lump-sum fee of EUR 125. That should be covered by the payments which clubs already makes to GEMA. This is an unnecessary duplicate payment. I feel sorry for the new DJs who – like me eight years ago – earn EUR 50 a gig in a cocktail bar. Financially, it’s not worth their effort.”

Kroll adds that the fee is like triple-taxation: “It is just not fair that GEMA collects three times – i.e. when the music-CD is bought, when it is played in the discotheques and finally the new .13 cent from the DJs. There is no reason for this additional license.

GEMA’s Nuremberg director Jürgen Baier, however, says that in the past DJs have had something of a free ride. “The law, i.e. the tariff, provides that everybody responsible for the reproduction has to license the rights. In the past the DJs sailed along in the wind of the club-owners.”

In the past the club-owners and concert organizers paid the GEMA fees including the DJs’ tariff. Whenever a club-owner allowed the DJ to play music from his laptop instead of CDs or Vinyl, an additional GEMA-surcharge of 30% was due. Arbitration proceedings are currently underway at the German patent office in Munich between GEMA, the Federal German Association for the Concert Promoters and Event Business (BDV) and the association of DJs. A decision is due within the next few weeks.


DJ Markus Zeidler from Dortmund says one likely byproduct of the new taxation is that DJs will increasingly use different formats. ”From now on DJs will play more CDs and vinyl,” he says, “because they do not want to pay the cost of the additional GEMA fees.”,

This is not the first confrontation between GEMA and Germany’s nightlife industry. The tension flared last summer when GEMA proposed new fees on German discos which then too sparked protests, including clubs shutting down in early-July. — According to Billboard