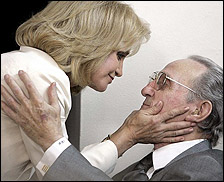 Mandrell was instrumental in the career of his daughter Barbara and taught her to play numerous musical instruments while she was growing up and then helped to guide her career as her manager, the Los Angeles Times reported.

Mandrell, originally a native of Hot Springs, Ark., embarked on a country music career of his own, singing and playing guitar on a local radio station in Hot Springs. After a stint in the Navy during World War II, Mandrell spent some time as a traveling musician before settling in Oceanside California with his new wife Mary, and opening Oceanside Music Supply with business partner Bill Hendricks.

Barbara's career started early and she notched her first professional performance with Joe Maphis in Las Vegas in 1960 when she was 11. She subsequently toured with Johnny Cash, June Carter, Patsy Cline and George Jones before Irby formed the Mandrell Family Band with his wife and daughter and toured the west.

Eventually Irby Mandrell settled into the role of managing his daughter's career. "He was not only my manager," Barbara told the L.A. Times. "he was my daddy, so he had my best interests at heart. . . . He wanted me to know the details of the business end, because it was show business, not just show."

Irby Mandrell suffered a stroke and died on March 5th in Nashville.