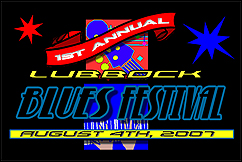 Brown told the Avalanche-Journal that he is uncertain whether Lubbock “is even a blues town” and whether local music fans are aware of the contributions made by the concert’s co-headliners, Johnny Winter and Long John Hunter.

Brown said he “also fought a losing battle against rumors. As soon as the ZZ Top show was confirmed for the same day (Aug. 4 at the United Spirit Arena), people started rumors saying we were canceling.

“We even emphasized on our Web site that there was no cancellation, that we were still holding the blues festival. The rumors just ran rampant.”

Brown told the paper that he moved to Lubbock one and a half years ago because of the city’s reputation for supporting live music. Instead, he lost band and sound company deposits totaling approximately $12,000.

Mike Pritchard, president of the Texas Panhandle Blues Society and Brown’s partner for the event, was even temporarily hospitalized for “heart problems caused by the stress.” Pritchard is now on heart medication.

After looking to alternate dates for the event with no success reconfirming the nine artists booked for the show, the entire idea was scrapped.

“I don’t know that Lubbock is ready for a blues or jazz festival. I don’t even hear a blues hour on the AM stations. A lot of people here told me they were behind us 100 percent, but not many even bought tickets to show support.”

Asked by the paper if he would go forward with plans to promote a 2008 jazz festival in Lubbock, Brown replied, “Wasn’t it Ben Franklin who said, ‘Insanity is doing the same thing and expecting different results’?”