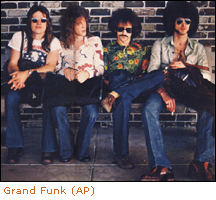 That's how you judged someone's record collection. By whether it contained Grand Funk Railroad

or not. If it did, they obviously hadn't gotten the memo, that Grand Funk SUCKED!

I don't know how the word spread, but I do remember a one sentence review in "Rolling Stone".

The critical backlash was close to
immediate. A reaction to both the music and Terry Knight's overhype.
But, "Rolling Stone" wasn't ubiquitous in 1970. And neither was FM radio. If you lived in the

I even saw them in February of '70. Opening for Sly Stone at Madison Square Garden. Right after

the red album's release, when they changed their name to Grand Funk. And by time summer hit,

there was a new album, "Closer To Home". Which I had no problem ignoring until I heard "I'm Your

Captain/Closer To Home" on a Sailfish, in the murky waters of Long Island Sound. Someone was

blasting the record from the lighthouse…and under the bright sun, skimming along the nearly

placid water, I realized I liked this record.

How could I square it? How could I admit it to myself? Did I have to keep it covered it up?

Well, not if I went to someone's house and they had the record. I'd drop the needle on the

Then Grand Funk faded away. And didn't radiate. Needing to pull a rabbit from the hat, do

something to keep their career alive, they enlisted Todd Rundgren to produce. And ended up with

a masterpiece, "We're An American Band".

understand that Todd had cut it. It was thin and compressed on PURPOSE! This record was one

step removed from "Todd", if not "Something/Anything". In the days before FM in the car, when

Suddenly, you could no longer hate Mark Farner, the shrimp with the endless hair. He was smart

enough to work with Todd. Now I could let my secret out of the box. That I thought "I'm Your

Captain/Closer To Home" was GOOD!

ultimately disappeared. They worked with a true hero of
mine, Frank Zappa, had no hits and retired from the national stage.
All that remained was the music. Well, three cuts. "We're An American Band", their cover of

"Loco-Motion" and "I'm Your Captain/ Closer To Home".

Why does "I'm Your Captain/Closer To Home" work? Maybe it's the simplicity. You can hear the

drums. The bass is prominent. Sure, Mark Farner is over-singing, but his guitar playing makes

up for his over-emoting. "I'm Your Captain/Closer To Home" was American stoner music. A ten

minute track, based in the blues, when the Englishmen owned this format. "I'm Your

Captain/Closer To Home" was about driving around in your Camaro drinking Budweiser. It wasn't

music for mingling with the opposite sex, it was about getting messed up with your buddies.

Until half way through. When they broke into "Closer To Home". When these bashers suddenly got

SUBTLE! It was like the second half of "Layla", months before. What was a rocker became an

ambling jam that set your mind adrift. By time you hit the end of the track, there were even

strings. The guys had softened, the girls had come to the party and the lights were out and

It might still be winter on the east coast. When I fired up the Bromley Website this morning, it

was -2. But in Los Angeles, spring has truly sprung. And with the bright sun shining, I was

"Everybody listen to me
And return me to my ship"

I wonder what a fifteen year old would say about this. It's absent Jimmy Page's pyrotechnics,

not until the end. But the playing, it sounds kind of pedestrian…

drums of the Top Forty are absent. There's a beat you don't find in indie rock. There actually

seems to be a story, a message, the song is personal, not universal…but maybe that's why

everybody can relate to it.

Tell you what. You sit behind the drums, you play Don's part. I'm sure someone can sing along

with the streaming words. And you don't need to be a wizard to play Mark's leads. I'm saving

Mel's bass part for myself. Yes, "I'm Your Captain/Closer To Home" is a perfect ROCK BAND song!

You can't play along to Alicia Keys. Nothing Timbaland does. But you become positively enmeshed

and ultimately enraptured by this song by these journeymen rockers. Even the least classic of

classic rock possesses a magic that can't be denied. It's good to go back to the garden.