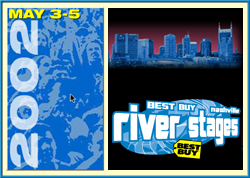 Best Buy has signed on as the corporate sponsor of the three-day Nashville River Stages May 3-5, making it the 4-year-old event's first-ever title sponsor and Best Buy's first sponsorship in Nashville. The three-year contract calls for Best Buy's signage to be incorporated in the festival's logo. Returning as stage sponsors are Budweiser, AmSouth Bank and BellSouth.

Among the acts scheduled to perform at the Clear Channel Entertainment-produced festival are Bo Diddley, Garbage, Jethro Tull, No Doubt, Pinmonkey and Warren Brothers. The confirmed lined is expected to be announced March 19.

John Aikin, general manager of the 10,000- capacity Crossroads Arena in Corinth, MS, for the past two years, has resigned his post to become director of the 10,800-seat Montayne Center on the campus of Lamar University in
Beaumont, Texas. Aikin said the position would give him the opportunity to work in a bigger market. He assumes his post in mid-April.

Elton John, Garth Brooks and ZZ Top are among the acts that have performed there.

Jazz at Lincoln Center's Board of Directors has unanimously elected longtime member Hughlyn Fierce to assume the organization’s newly-created position of president and chief executive Officer.

Fierce, currently the Board treasurer, will assume responsibility for the day-to-day administration of the organization. He will focus on the planning and execution of J@LC’s ambitious educational and curatorial programming, which will include over 450 events in the upcoming 2002-03 season alone. He will work closely with Executive Director Bruce MacCombie, who will now concentrate fully on coordinating the development of Frederick P. Rose Hall, the new facility for J@LC scheduled to open in fall 2004.

Lisa Schiff, the chairman of the Board of J@LC, said, “It gives me great pleasure to announce the creation of this new position and Hugh Fierce’s appointment. The growth of this organization over the last 11 years has been phenomenal and inspiring for everyone involved. We have reached a size and complexity that requires additional resources, and we know that Hugh will provide the expertise and leadership necessary to navigate our continued expansion with success and style. At the same time, this will allow Bruce to focus his leadership on the considerable task of assuring the facility project’s successful completion.”

J@LC artistic director Wynton Marsalis said, “Hugh has been a valued member of our board since the inception of Jazz at Lincoln Center. His love of jazz and insight into the nature of the particular challenges that face us as we expand our organization make him the perfect person for this job at this time. He brings a swinging attitude, tremendous business and fiscal expertise, and a profound understanding of, and passion for, J@LC’s mission.”

“I view this new position as a wonderful opportunity to expand and deepen my commitment to this incredible organization,” said Fierce. “I believe in the mission of Jazz at Lincoln Center to entertain and educate people around the world about this great American art form, and I look forward to working with the board, staff, musicians, and community at large to increase its role in the cultural life of the city and the world.”

“The construction of Frederick P. Rose Hall will not only be a defining point for our organization, but will also be a historic event in the evolution of jazz in this country,” said MacCombie. “We are reaching a crossroads in the construction process where the level of intensity requires a higher degree of management and attention. I look forward to working with Hugh as the organization reaches new heights.”