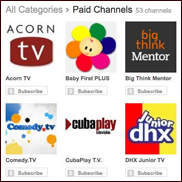 Under the pilot program, a small number of content makers will offer the channels for subscriptions starting at $0.99 (£0.64) a month.

Each channel will offer a free 14-day trial and many will have discounted annual rates.

Although the initial 53-channel line-up is fairly niche, one expert suggested the move might ultimately squeeze some smaller rivals out of the market.

YouTube, which is owned by Google, said the launch was part of an effort to enable "content creators to earn revenue for their creativity."

For example, the children's television favorite, Sesame Street will offer full episodes on its pay channel when it launches.

Subscribers can pay using either their credit cards or through Google's own Wallet service.

The paid channels involved in the pilot are diverse.

They include National Geographic Kids, Acorn – which provides episodes from several British TV series -and Fix My Hog Premium, which is aimed at Harley Davidson motorcycle enthusiasts.

"This is just the beginning", YouTube said on its blog.

"We'll be rolling paid channels out more broadly in the coming weeks as a self-service feature for qualifying partners.

"And as new channels appear, we'll be making sure you can discover them."

"The wider picture here is that the internet and TV worlds are colliding," Ian Maude, an online media expert at consultants Enders Analysis told the BBC.

"The YouTube move will make it much harder for smaller standalone online subscription-based platforms because Google has the infrastructure to make it easy for content to be hosted, delivered and billed for.

"But it was always inevitable that Google was going to do this."

Google bought YouTube in 2006 for $1.65bn. The service is believed to generate a small amount of revenue from advertising, but the vast majority of its content has been free-to-watch.

To make itself more attractive to potential advertisers, YouTube has gradually added professional content, such as full-length films and TV shows, to its vast library of amateur videos.

YouTube says a billion people around the world use the service every month.

"If YouTube were a country, we'd be the third largest in the world after China and India," the company said in March.