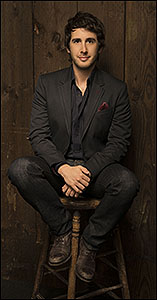 NEW YORK (AP) — Josh Groban admits he was hesitant to show that he was more than a guy with a big voice who could perform sweeping ballads.

"For so much of my career I think I was a little bit protective of the brand or the image of the voice," he said in a recent interview. "And that's half of me. But I think I've been less afraid to let my freak flag fly a little bit — it has waved gloriously in the wind — and it's been fun."
Groban, 33, has shown his quick wit and easygoing personality on social media and as a guest host on "Live With Kelly!" before Michael Strahan was named Kelly Ripa's permanent co-host.

"I scoffed at Twitter when it first started. I was like, 'Oh god, this is … not what I do,'" he said. "I was having a high-and-mighty thing about it, and then I started doing it and I realized that I could send a tweet like I send a text, and every time I make my friends laugh and they'd go, 'Man, nobody knows how funny you are,' and I'd go, 'No, no, no, well they couldn't. They couldn't possibly know. I have a billboard of me staring at them from a desert and my new Christmas album is climbing the charts. They can't possibly know that I have a funny bone.'"

Now he realizes "we're not all one thing."

"People like Jimmy Kimmel have been unbelievable to me in giving me skits and funny sketches to do when nobody else was giving me couch time because they just assumed with my style of music, I wouldn't have a personality," he said.
Now he's stepping further outside his comfort zone as host of ABC's new singing competition series, "Rising Star," with Brad Paisley, Kesha and Ludacris (Sundays, 9 p.m. EDT). The show has an interactive element by allowing real-time viewing.

Groban understands why some people might be hesitant to tune into the show because they feel the market is too saturated with music competitions, but hopes they'll give it a shot.
"I wouldn't have signed on to it if I didn't think that this was gonna be different, that it was gonna be fun and funny and exciting," he said.

"Now if people are just sick of the genre, I would say … give it a chance. … Give it a shot. Watch it. Hopefully, we'll keep you around."