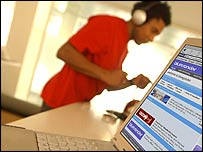 An Internet user defended by the Association of Audionautes (ADA) was released free of charges by the District Court of Paris, France after downloading and uploading music and movies on the Internet.

Several Internet users defended by the ADA have already been released free of charges for having downloaded copyrighted content on Internet on the basis of the "private copying" doctrine:

But this decision is the first one to authorize both the downloading and uploading of P2P content for Internet users. On September 21, 2004, the prosecutor's office found 1875 MP3 and DIVX files on the defendant's hard drive. Based on this discovery, a French record producer association known as the SCPP (Société Civile des Producteurs Phonographiques) sued him for downloading and uploading 1212 music tracks.

The District Court of Paris, however, refused to agree with the SCPP's argument. Following the line of reasoning utilized by the ADA for nearly two years, the judges decided that these acts of downloading and uploading qualified as "private copying."

While the case has been appealed to a higher court, Aziz Ridouan, president of the ADA approves of the current verdict and is confident that it will be affirmed. According to Jean-Baptiste Soufron, legal counsel of the ADA, "This most recent decision is consistent with the definitive decision of the French Appellate Court of Montpellier. It is an important stepping stone in our fight to legalize P2P." France was the first country in the world to propose the legalization of P2P downloading to Parliament. –Bob Grossweiner and Jane Cohen