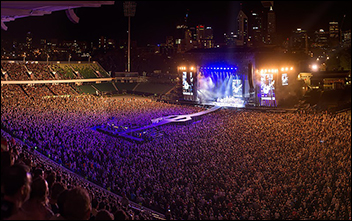 
The award caps off a big year for the independent promoter. In 2015 Frontier toured the Foo Fighters, Drake, Kylie, Eagles, Rod Stewart, alt-J, The Script, Chet Faker and more. The conclusion of the year will see sold out stadium tours from superstars Taylor Swift and Ed Sheeran plus tours from Sam Smith, Rise Against, Rudimental, Lucinda Williams, Thurston Moore Band and Bully. Swift begins her Australian tour with the biggest show of the entire The 1989 World Tour, performing to more than 72,000 people at Sydney’s ANZ Stadium on Saturday 28 November.


Managing Director of Frontier Touring, Michael Gudinski said of the accolade “It is such an honor to be recognized as the leading Independent International Promoter by Billboard. Even more significantly we are the first ever Australasian promoter to receive this award.


“Frontier is fiercely independent and we pride ourselves on our ability to hold our own in an increasingly globalised business. In the past year we have toured some of the greatest talent in music today and I’m so proud of how our Frontier family has continued to set the bar higher and higher for concert promoting in Australia and New Zealand.”


In the July Billboard half yearly Boxscore results Frontier was listed as the #3 overall promoter and #1 Independent promoter in the world, ranking behind Live Nation and AEG Live.