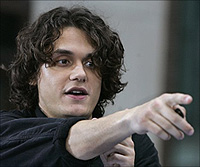 HERSHEY, PA (CelebrityAccess MediaWire) — In the wake of a Hershey Pennsylvania in which 63 fans were arrested for under-aged drinking, John Mayer has responded to the incident with a tongue-in-cheek post in his blog.

IN RESPONSE TO THE ARREST OF 63 FANS

This weekend, at my concert in Hershey Pennsylvania, 63 audience members were arrested for various drug and alcohol offenses. Seeing as I have always kept a strong line of communication with my fans, I'd like to take a moment to address this unfortunate incident.

Though the names of the arrested were not released to the public, I was able to obtain them by way of my well-placed source in the Hershey police department. Upon first glance, I find it interesting that of the 63 arrested, 55 were named Kyle.

And to those reading who believe that 63 arrests is on the high side, it actually doesn't even make this tour's top ten. Night two of Red Rocks Ampitheatre in Colorado saw more than half that capacity crowd placed under arrest, and in Houston, Texas two weeks ago, I myself was ensnared by the long arm of the law when I was cited for illegally soliciting an undercover canine cop. (My apologies to Champ II.)

In looking to the future, I hope that this will serve as a wake-up call to young fans who may be thinking about engaging in illegal activity at one of my concerts. If I happen to be walking backstage and I see any of you young men passed out drunk on a stretcher, make no mistake about it, you will come-to in front of your disappointed parents with a face full of Sharpie and the sneaking suspicion that you've been teabagged by one of Time Magazine's 100 most influential people of 2007.