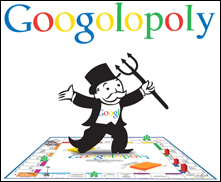 While Steve Jobs has been pontificating in NoCal, I’ve been reading the newspapers. I was struck by an article in the "Wall Street Journal", saying that the Justice Department appears to be gearing up to sue Google.

Do you use Google?

As Dave Matthews would say, I use it everyday. There’s just nothing as good. Google is so good, it’s a parlor trick, with the "I’m Feeling Lucky" button delivering exactly what you’re looking for.

I also employ Yahoo search. For the different results it delivers. But most people stay with Google, which I too use most of the time. Because online, ONE SITE DOMINATES!

I just don’t understand how the music business titans don’t get this. There’s only one Amazon. Only one Google. And only one iTunes Music Store. To try and create a competitor is a wasted effort, unless it’s utterly superior.

Did you read all that hype about the new search engine, cuil.com? What a waste of time that turned out to be. Slightly different interface delivering less information which wasn’t what I was looking for.

Does Google need to be stopped? Interesting question. Peter Paterno doesn’t believe in antitrust. He says the giants always falter. And it appears he’s right regarding Microsoft. Not only did they miss out on Google, they didn’t foresee Apple’s resurgence. And by utilizing aged Jerry Seinfeld in incomprehensible ads, they’re only illustrating how out of touch they are and how far they’re going to fall.

But irrelevant of your viewpoint on monopolies, you MUST understand that EVERY retail outlet is a click away online. In real life, location and convenience and price matter. Online, everybody’s in the same neighborhood and everybody’s got a low price, comparison shopping can be done by bot! You distinguish yourself by the extras. In Amazon’s case, its trustworthiness. The company’s been around forever, will deliver your product and will take it back. The company at the same price or marginally cheaper? Will you even get the product? Are they an authorized dealer?

MySpace Music is a complete waste of time. A failed effort before it’s really gotten started. Because it won’t be better than iTunes. In order to beat Apple, you’ve got to be better or cheaper. Hard to see how MySpace can sell music more cheaply, since there are fixed costs having to do with publishers, etc. As for better… Shit, MySpace itself is such an horrendous user experience that to think they can out-Apple Apple is LAUGHABLE!

This battle has been fought and won. Per track downloads is owned by Apple. At least until record companies, publishers and acts decide to play with LOWER prices, allowing third parties to distinguish themselves, and a new Steve Jobs comes around the bend, to fight Apple. There’s not even a new Steve Jobs in the computer world, what are the odds one’s going to show up in online music? Where the margins are low and the labels are ancient, trying to protect their old business model and not allowing anybody to make any money?

Yes, you could lower prices at a new store, and keep them high at Apple.

Then again, Apple can eat away at its own margins…

Furthermore, if you think a hand-held player better than the iPod has been delivered, seventy plus percent of the public disagrees.

But the labels want to hamstring all partners. I can’t comprehend Nokia’s Comes With Music, how can the public? You get the tunes for how long? And you can transfer them where?

After a better player, the service that needs to be delivered offers up all you can eat for a low price, unrestricted. That’s it. That’s the future of the music business, that’s what we’ve got today, it’s just that the industry is not being compensated for acquisition.

Online retail is not like the physical world. One company dominates in almost every sphere. Give up the ghost on this one, and incentivize new partners to create innovative offerings. But seeing as how the labels think innovation is a dirty word, that computers are the enemy, out to steal their business, this won’t happen, at least not until they lose their power and new rights holders are negotiating.