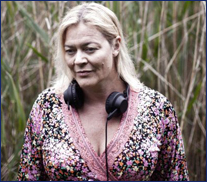 "It has not been an easy decision. Roskilde Festival is a lifelong love. But my years at the festival has given me a wealth of experience that I have tremendous desire to bring into play in a different context. And I think I`ve reached an age and is a place in my life, where it should be now "says the 49-year-old Rikke Øxner.

She has worked for the festival for 20 years. First under the former Talent Buyer, Leif Skov. When he retired in 2002 Rikke Øxner took over the music planning.

"There has been no dispute about the line of doing the festivals booking. I met Anders Wahren when he was 19. Since then I have worked for him to take the post. So I`m rather glad to leave an event that I know is in good hands, "says Rikke Øxner

Alongside her work as Talent Buyer at Roskilde Festival Rikke Øxner has played a leading role in the Association of European festivals. Yourope, which she currently chairs. Rikke Øxner will remain chair of Yourope until March 2015.

The artistic director holds a farewell reception on August 21 at Vega in Copenhagen.

"Now I`m looking forward to come to the festival next year with no obligation. I was at Roskilde first time in 1984 and, like thousands of other festival-goers, I always think that it is my festival, "said the outgoing Rikke Øxner.