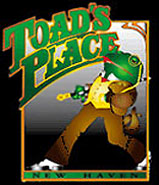 One of the clubs, the River House, will have a capacity of about 1,500 and is slated to open next fall. Owner Bill Reid, who is also the president of Rising Tide Productions and owns another club in Norfolk, VA, told the Richmond Times-Dispatch that the venue would include a restaurant, backstage sauna and limited fixed seating.

“I think we’re talking country, blues, rock, some jazz, comedians,” he said. He added that he expects similar acts that played his Norfolk club, such as Wilco, Hilary Duff and Blues Traveler, to also perform at the River House.

Another club will be located on the Canal Walk in Richmond. This venue will be modeled after the popular New Haven club, Toad’s Place. "It'll be a franchise," said Jeff Sadler of Turning Point Development. "We're not sure whether it'll be Toad's Place Richmond or Toad's Place on the Canal."

The club is expected to have room for 1,200 to 1,500 patrons and a full restaurant. The interior will be divided into three levels to best take advantage of its location. Sadler said the new Toad’s Place will be a “total entertainment venue.”

The third venue is being built by Bill Muehlhauser who owns two taverns in Maryland. The club is planned to be built on Brown’s Island and is expected to open in 2005. –by CelebrityAccess Staff Writers