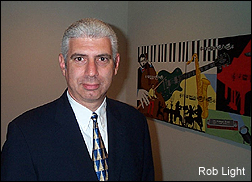 Among his predictions for 2002 are cheaper tickets, tighter security, a move toward more multi-act and festival shows and increased bookings for "heritage rocks acts (a term he prefers to "classic rock") like REO Speedwagon.

" I think you'll see more packages and varied combinations than in the past," he said. "Partially for economics, but also being aware of the public and how often they are going to go out. Is somebody who went to six concerts last year going to go to as many this year if money is an issue? Or if world events and just wanting to stay home more is an issue? What is going to get somebody off the couch to go? If it's a can't-miss or once-in-a-lifetime grouping of acts, that will do it."

According to Light, heritage rock acts are now registering 5,000 to 6,000 tickets on the first day of sales.

"I really wouldn't be surprised if it has some connection to what's going on," he opined. "It's comfort food. Country music too I would expect to do better and [rock] music that drills down a level to emotional cores. Not just the loud, aggressive stuff. Like Slipknot— will people really be wanting to hear that a year from now?"

Reflecting on the aftermath of September 11, Light likens the mood following the attacks akin to the assassination of President Kennedy.

"The catastrophe that has happened, in a way it reminds me of when Kennedy was killed. The music in recent years, the pop stuff, is a lot like the music that was popular in the years before Kennedy was killed. Terrible, superficial music." Then and now, "There was a moment and there was music, there's this follow-and-lead relationship that has happened in times like that .. and now music matters again and I think people want music that matters. And they want to see it live."