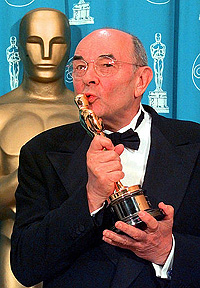 Stanley Donen will receive the 2002 American Society of Cinematographers (ASC) Board of Governors Award. The award is periodically presented to an individual who has made extraordinary and enduring contributions to advancing the art of filmmaking. It will be presented to Donen at the 16th Annual ASC Outstanding Achievement Award ceremonies on February 17 at the Century Plaza Hotel.

"Stanley Donen created a memorable body of work, including many classic films that have become an integral part of our culture," says ASC President Victor J. Kemper. "He has an incomparable gift for translating music and dance into cinematic art, and that is just one dimension of his talent. Movies that he directed more than 40 years ago still set the highest standards for artistic innovation, and we are sure that will be true 40 years from now. Cinematographers loved working on Stanley Donen films."

Donen's body of work as a director includes such milestone musicals as "Singin' in the Rain," "Seven Brides for Seven Brothers," "Funny Face," "The Pajama Game" and "Damn Yankees!" After the demise of the big studio musicals, Donen reinvented himself by moving to Europe, where he helmed film noire style movies such as "Charade." His body of work also includes the notable films "Bedazzled," "Two for the Road," "The Little Prince," "Movie Movie" and "Blame It on Rio."

The ASC Board of Governors Award is the only recognition ASC reserves for filmmakers who operate outside of the realm of cinematography.

Donen was born and raised in Columbia, South Carolina, where he began dancing at the age of 10. His talent took him to New York in 1940, where he appeared on Broadway in the chorus of "Pal Joey" at the age of 16. It was the beginning of his extraordinary collaboration with Gene Kelly who was the star of that show. In 1941, Donen was in the chorus and assisted Kelly in choreographing "Best Foot Forward," another Broadway hit. He debuted in Hollywood in 1943 in the chorus and as assistant choreographer for Kelly in the film version of "Best Foot Forward."

Donen continued his collaboration with Kelly on "Cover Girl" and "Anchors Aweigh," and subsequently earned choreography credits on various other 1940s musicals, including "A Date with Judy," "The Kissing Bandit" and "Take Me Out to the Ball Game." He shared his first directing credit with Kelly in "On the Town" in 1949 when he was only 25 years old. Three years later, Donen and Kelly collaborated on "Singin' in the Rain." Donen compiled more than 20 film credits by his 30th birthday.