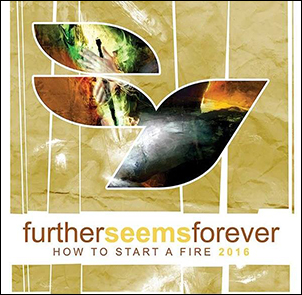 POMPANO BEACH, FL (CelebrityAccess) — Further Seems Forever has announced they will stop in 9 cities to perform the band's sophomore album ‘How To Start A Fire’ in its entirety. The first time the band has hit the stage together in almost ten years, this tour kicks off on March 10th in Atlanta, GA and wraps up on March 20th in San Francisco, CA.

When asked about the tour, bassist Chad Neptune said: "Further Seems Forever was a lot of things… and for a lot of people 'How To Start A Fire' is what it was. Jason, Steve, Derick & I toured the world in this incarnation more than any other. We met a lot of people and slept on a lot of their floors. Things ended very abrupt with Jason to say the least. I think we realized that there was a contingent of our fans that wanted to see Jason again. This is also therapeutic for us."


Some books are better left unfinished while others empty pages leave us wondering, "what happened?" The book of Further Seems Forever has had many chapters, a revolving cast of characters and one main plot point that endured throughout: innovative and passionate songs that could make the most introverted person belt out their lyrics. In 2003 you would be hard pressed to find someone not belting out "Let's set this city ablaze!" which are the opening words to the band's second record, How To Start A Fire. The album sold over 100,000 copies in the US alone. For the next two years, Further Seems Forever hit the road with a fire and a fury rarely seen by their peers. Touring with bands such as New Found Glory, Elliott, Hot Rod Circuit, Thursday, Coheed & Cambria and so many more, the band solidified themselves as a leader in their genre. Too often the case with creative, passionate people, life on the road began to take its toll on the members of the band. Jason Gleason, Derek Cordoba, Chad Neptune and Steve Kleisath made incredible music together but on the heels of what would be their biggest headline tour to date (The Tooth and Nail Tour with support from Anberlin), the music stopped. Tensions between the members had reached a critical point and Gleason had decided to leave the band. While the band continued on with new singer, Jon Bunch, many fans were left with an incomplete feeling. This wasn't how it was meant to end and over ten years later, Further Seems Forever is back with Jason Gleason and ready to finish the chapter that is How To Start a Fire.