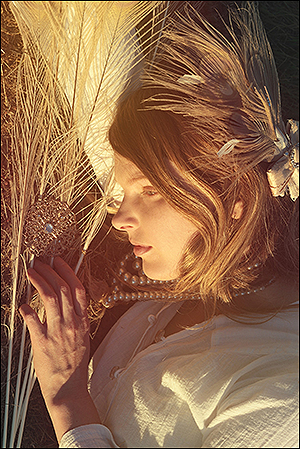 (CelebrityAccess) – Miranda Lee Richards will be releasing her new album Existential Beast on June 16 via Invisible Hands Music. Existential Beast was recorded in Los Angeles with producer Rick Parker, best known for his work with BRMC and features first single "Lucid I Would Dream," chosen by BBC 6's Lauren Laverne as a "headphone moment."

Miranda describes "Lucid I Would Dream" as, "a conversation with the subconscious and a study in dream interpretation. I have recurring dreams about being able to breathe underwater, and this apparently, is about being able to master complex emotional realms." Listen to "Lucid I Would Dream" today on YAHOO. In May, Miranda will perform two Los Angeles shows: May 4 at Alchemical Castle-Hollywood and her album release show on May 31 at the Bootleg Theater. Expect more U.S. and U.K. dates to be announced soon.

Existential Beast is a political album, examining the issues of our time, but with the intent of tackling these tough and often taboo subjects in a poetic and heartfelt manner. The title is also a mash-up of terms, referencing the existential crisis that has in turn arisen. Miranda says of Existential Beast, "In essence, we are all still working within those animal urges of fear, competition, survival and sexuality which are deep-seeded and manifesting in varying ways and degrees for different individuals, depending on where they are at. But like it or not, these tendencies have been revealed, within our leaders, our countries and ourselves; it is indeed a pivotal and transformational time and there is much work to be done."

Born in San Francisco after the summer of love and before the dawn of disco, Miranda Lee Richards grew up in an artistic and bohemian environment that has informed her adult life and work. After graduating from San Francisco School Of The Arts, she began to pursue a musical career. She met Kirk Hammett from Metallica who taught her to play Mazzy Star songs on guitar. Her early demos reached Anton Newcombe and she joined his band, the Brian Jonestown Massacre. MIRANDA then signed to Virgin Records and released her debut album The Herethereafter, a mix of folk, psychedelia, country and indie pop, and found fans worldwide. The critically acclaimed follow-up album Light Of X–the title of which comes from a dream about harnessing beams of light to travel in time–followed in 2009 via Nettwerk Records.

In 2016, Miranda unveiled Echoes Of The Dreamtime on Invisible Hands Music, which received rave reviews across in the U.K. and U.S., as well as national airplay with MOJO giving the album 4 stars and hailing the first single, "The sublime 'First Light Of Winter' is the moment it all comes together, Richards transcending her influences and, no longer constrained, arriving at psychedelia's higher plane" (1/2016). Existential Beast is yet another confident and inspiring piece of work from Miranda, sure to excite her ever growing fan base. Known for her enchanting live performances, look for Miranda Lee Richards to perform the new album in venues across the U.S. and U.K. later this year.