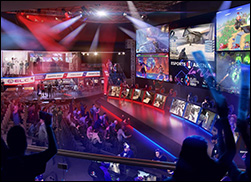 LAS VEGAS (CelebrityAccess) — Las Vegas will be the next North American city to be home to an arena dedicated to competitive gaming.

MGM Resorts International on Tuesday said that they plan to convert the now closed nightclub at Luxor into a new, multi-level e-sports arena, expected to open in early 2018.

The venue, which is being developed in partnership with e-sport venue operator Allied Esports, will be able to accommodate between 750 and 1,000 people, MGM said. When completed, the 30,000-square-foot space will include a competition stage, LED video wall, telescopic seating, gaming stations, food and beverage offerings, and state-of-the-art streaming and television-quality production studios.

The property will be managed by Allied Esports, and Esports Arena, an operator from California.

"We have very ambitious expansion plans over the next two years, and when we realized that a location at Luxor was possible, we jumped at the opportunity to develop our flagship here," said Jud Hannigan, CEO of Allied Esports International. "Just as Yankee Stadium, Madison Square Garden and Wembley Stadium are considered their sports' most aspirational venues by players and fans alike, Esports Arena Las Vegas will be the iconic destination in esports and complement the city's incredible appeal, attracting video gaming competitors and fans from around the world."

The new arena comes as Las Vegas seeks to diversify its entertainment offerings to attract millennials who have shown little interest in table gaming. E-sports, which pits professional video game players against each other in high-stakes games that are presented via streaming services such as twitch, and live in front of audiences, has a large worldwide of more than 200 million fans and annual revenue on track to pass a billion dollars in 2017, according to sector analysts. – Staff Writers