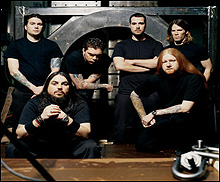 CLEVELAND (CelebrityAccess MediaWire) — Cleveland-based metal outfit Chimaira has been forced to scrap the Russian dates of their tour after reportedly being refused entry visas by the Russian government. The dates had been planned to make up for shows that had originally been scheduled for October 20009.

A post on the band's website said: "Much to our despair, we’ve been denied entry into Russia to perform for our patient and metal starved fans. After having to postpone the original dates from October 2009, we’ve had plenty of time to prepare for this trip. Everything has been in place for weeks now…The gear has been ordered, the flights have been booked, and we’re HERE, on the European continent, ready to depart for St. Petersburg tomorrow morning. But to our absolute dismay and MASSIVE financial burden, the Russian Embassy has refused to issue us our visas. Nice timing right? And after our road manager spending three days at the Embassy searching for answers and resolution, we’ve basically been given the middle finger, and there’s nothing further we can do. Our biggest regret is for the fans who have been waiting months for this weekend to come, and we hope they can understand that we’ve exhausted every option to correct the situation. Please accept our deepest apologies, we’ll try to make it up to you all one day."

Chimaira had just finished a string of dates in the UK and were scheduled for a pair dates in Moscow and St. Petersburg before returning to the U.S. to take part in the Rockstar Mayhem Tour this summer. – CelebrityAccess Staff Writers