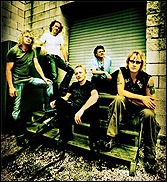 MUMBAI (CelebrityAccess MediaWire) — Def Leppard has pulled out of a pair of October dates in India, citing unspecified unforeseen circumstances.

In a post on the band's website, the band writes: "We are sorry to report that due to unforeseen circumstances, the two shows in India have been cancelled. We apologize to our Indian fans and hope to be able to make up for it in the future."

While the band has been mum on the reason for the cancellation of the two shows, set for October 17 & 19 in the Indian cities of Mumbai and Bangalore, the events organizers, E-18 have expressed concerns about security.

E-18 CEO Farhad Wadia commented, "How can you have a concert when there are bomb blasts in the country? Security was one of the main reasons why we had to postpone the concert. Eventually, the band also decided not to perform since the situation is too precarious."

Wadia was referring to a series of bombings that have been targeted at churches and markets in India and a mob recently attacked security guards at a Tata automobile factory in Mumbai.

As of yet, neither of the two dates has been rescheduled. The tour will now kick off in Tokyo on October 23rd.

An upcoming concert by Anoushka Shankar & Jethro Tull which is set to go in December. – CelebrityAccess Staff Writers