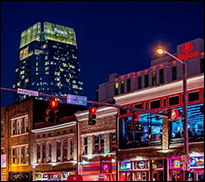 NASHVILLE (CelebrityAccess) The sudden fall from grace for Nashville Mayor Megan Barry continues, with Barry resigning from her position as part of a guilty plea to a felony theft charge March 6.

Barry, the first female mayor of Nashville, had been touted as a rising political star and was credited with helping to raise Nashville’s status as the “It City” but a sex scandal involving her former head of security began a recent and sudden downward spiral.

She resigned a half-hour after pleading guilty, part of a plea agreement, to a felony theft charge in relationship to the affair, according to the Tennessean. The resignation “sent the city into uncharted territory” according to the paper, with Vice Mayor David Briley sworn in as the Metro’s eighth mayor in a brief ceremony. The paper speculated that the resignation could harm tourism to the country music travel destination.

“While my time as mayor today concludes, my unwavering love and sincere affection for this wonderful city and its great people will never come to an end,” Barry said. “No one is as excited about this city and its bright and limitless future as I am.

“It has been my honor and it has been the privilege of my entire professional life to have the blessing and the opportunity to be your mayor,” she concluded. “I thank you in advance for the support that I am sure you will give Mayor Briley in the weeks and the months ahead. God bless this wonderful city. I love you, Nashville.”

Barry’s resignation comes 34 days after admitting two a two-tear affair with her former bodyguard, former police Sgt. Rob Forrest Jr., who retired the same day as Barry admitted to the impropriety. Forrest accompanied Barry on trips to Paris, Athens, Washington, New York, Denver, Oakland and other cities in the past year, according to the Tennessean, and nine of the trips were only Barry and Forrest, including the trip to Greece. Forrest got $33,000 in expenses and more than $50,000 in overtime last year on top of his $84,500 salary, the paper said.

Forrest also pleaded guilty Tuesday to property theft. He is required to reimburse the city $45,000 for salary and overtime pay. Barry agreed to repay $11,000 in unlawful expenses.

Barry, a democrat elected in 2015, was considered a rising political star, according to the Washington Post, with the city’s growth both in size and in attention growing exponentially. She performed the first same-sex wedding in Nashville in 2015 and is credited for opening the city’s first Ikea outlet, slated for 2020. Last year she proclaimed Ryman Auditorium Day in the city and helped Music Row unveil the new signage for the city’s iconic RCA Studio A, the namesake of Chris Stapleton’s recent From A Room albums.

Barry is also a subject of a special investigation launched by the Metro Council on misuse of taxpayers dollars and an ethics complaint by the council’s Board of Ethical Conduct, the Tennessean said.