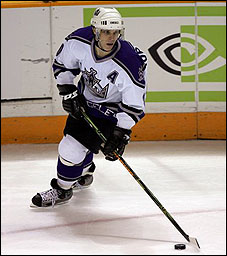 LOS ANGELES (CelebrityAccess MediaWire) – Luc Robitaille, who retired last April as the highest scoring left wing in National Hockey League history, has been named Sr. Consultant, AEG Sports in addition to Assistant to the Governor and Alternate Governor to the Los Angeles Kings it was announced by Timothy J. Leiweke, President & CEO AEG and Governor of the Kings franchise.

Robitaille will serve a variety of roles with both AEG the Kings primarily focusing on the Kings business operations and player/community relations areas, as well as the continued development of both the Citizens Business Bank Arena in Ontario, CA, and the new Sprint Center in Kansas City, MO, which is scheduled to open in the Fall of 2007.

"Ontario is a vibrant market and Luc will not only assist in our efforts to bring a professional hockey team to the arena, but also work to ingrain the franchise into the community," said Leiweke. "As it is becoming more probable that Kansas City will get a hockey team in the very near future, Luc, who has some of the strongest relationships in the sports business industry, will play a significant role in our efforts to acquire a pro franchise for Sprint Center."

"Additionally, we will rely on Luc to help further ingrain the Kings history and tradition of winning into our franchise and throughout our organization and fan base," Leiweke added. "Luc has a great sense for business and his expertise and knowledge will continue to grow as he learns the business side of AEG and the Kings."

Said Robitaille, who will have his popular No. 20 jersey retired by the Kings on January 20, 2007, prior to the Kings-Phoenix Coyotes game at Staples Center: "The game of hockey has been extremely good to me and my family, and I have always considered the Kings to be my second family. Therefore, this new role is an ideal situation. I have always had tremendous interest in the business of hockey and in staying active in this great sport. Even though I'm not on the ice anymore, my goal remains the same — to bring the cup to Los Angeles."

Robitaille, who in addition to be the highest scoring left wing in NHL history, is the all-time Kings leader in goals scored and a future member of the Hockey Hall of Fame. He retired as a player at the end of last season, and in 19 seasons in the NHL – including 14 with the Kings — Robitaille, in 1,431 career regular season games with the Kings, Detroit Red Wings (where he won a Stanley Cup in 2002), New York Rangers and Pittsburgh Penguins

"Luc will bring a great deal of energy and enthusiasm to our franchise and the company as a whole," said Kings President/General Manager Dean Lombardi. "The amount of respect he commands will have nothing but a positive impact on our entire organization."

Robitaille as a player was honored with several awards and he set numerous records throughout his long and distinguished career. In addition to being the highest scoring left wing in NHL history, a mark he set in a Kings uniform with an assist on March 22, 2004, with his 1,370th point to pass Hall of Famer John Bucyk, Robitaille holds the NHL record for left wingers for goals (668). He is also 10th in overall NHL goal scoring with 668 goals, 19th in overall NHL scoring with 1,394 points and he is the only left wing in NHL history to record eight consecutive 40-goal seasons (all with the Kings).

With the Kings, Robitaille ranks second all-time in games played (1,077), second in points (1,154) and fourth in assists (597). Last season, on January 19 at STAPLES Center, he set the Kings all-time record for goals when his 551st goal as a King surpassed former teammate, long-time friend and Hall of Famer Marcel Dionne. In 1,077 total regular season games as a King, Robitaille had 1,154 points (557-597=1,154) and 922 penalty minutes. – CelebrityAccess Staff Writers