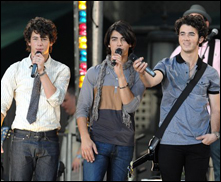 NEW YORK (CelebrityAccess MediaWire) — The Jonas Brothers had teenage girls awake engaged and screaming the morning of Friday August, 8. The teen sensations played a free show in Bryant Park, NYC for the taping of ABC’s “Good Morning America." The show drew thousands of teenage fans (mostly girls) who were swooning around the stage even though it was only 7:00 am. It was a record breaking audience for the New York based ABC show. It is estimated that approximately 15,000 fans, including their ‘lucky’ parents were at the park that morning.

The pop hot trio played some of their hits including "S.O.S." "Pushing Me Away" and "Burning Up," which has been nominated for Best Pop Video at the MTV VMAs. They also sang fresh music off their new album "A Little Bit Longer" which was recorded while they were on a recent tour. The new album debuts on August 12, according to the Daily Dish.

According to the Daily Dish, The polite boys thanked York City’s finest, before ending their gig, and dismissed all gossip of group tension, declaring, "We enjoy it so much, there's really no time to argue. And look at this (pointing to their audience)…Thank you for doing that." –by CelebrityAccess Staff Writers