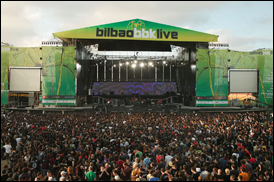 BILBOA Spain (VIP) — Last Tour International, the Spanish promoter and organizer of events such as Azkena Rock Festival in Vitoria-Gasteiz and Santander Summer, has announced dates of the third edition of its most ambitious festival: Bilbao BBK Live.

Bilbao BBK Live has become one of the most important festivals in Spain after just 2 editions. 95,000 people attended this summer’s event that took place over 4 days (June 21-22-28-29) in Kobetamendi hill (Bilbao).

Acts like Metallica, Red Hot CHili Peppers and Iron Maiden, chose Bilbao BBK Live to be their only show in Spain in 2007 and contributed to consolidate this event, where Guns n’ Roses, Placebo and Pretenders among others also performed.

“The success of this past summer has rewarded the effort, perseverance and work achieved by our company and sponsors over these past years and, therefore, confirms that a big festival is possible in Northern Spain” notes Javier Arnaiz, one of the 3 partners owning the company and responsible for booking at Last Tour International.

The 2007 edition saw a remarkable amount of fans coming from the U.K. and especially from France. “It is always positive for a city like Bilbao, in constant progress and renovation plus very interested in promoting tourism, to see an increased number of visitors from nearby countries” says Arnaiz.

Despite the fact that in 2007 Bilbao BBK Live’s bill was clearly inclined towards heavy metal music, the responsible booker at Last Tour International points out that the aim of the festival has always been to have space for different music styles not unalike other European festivals.

“It is true that this past summer was clearly focused on Heavy and Metal music, with performances from Metallica, Iron Maiden, My Chemical Romance and Within Temptation; but bands like Red Hot Chili Peppers, Maceo Parker and Fishbone showed that other styles were included. In 2008, we will continue this line of work: go for great Acts and put together a diverse and interesting bill” confirms Javier Arnaiz.

The third edition of Bilbao BBK Live will certainly be a challenge for Last Tour International, after the successful edition of this summer, which left both the critics and the audience happy. Nevertheless, the company conducted by Javier Arnaiz, Alfonso Santiago and Xabier Arretxe, has many years of experience in the sector.

Last Tour International, based in Bilbao, has also announced the opening of its new Barcelona and Madrid offices. Other events promoted by the company are Azkena Rock Festival, a rock and roll party which has been going on for 6 years and where Acts such as Iggy and The Stooges, Pearl Jam, Tool, Wilco… have played; as well as the 3 editions of electronic and pop festival Santander Summer which has seen performances by acts such as The Chemical Brothers, Sonic Youth, The Prodigy, The Black Eyed Peas, HIM and Ocean Colour Scene.

Moreover, Last Tour International includes a management and booking department with some of the best selling acts in Spain, such as Andrés Calamaro and the hugely successful Fito & Fitipaldis whose current tour has exceeded the figure of 950,000 sold tickets.

“Our intention in the future is to strengthen the management area in Spain and reinforce the booking of international acts, increasing our business’ capacity by directly dealing with agents. Likewise, we will do our best to make Bilbao BBK Live one of the most important music festivals in Spain” stresses Javier Arnaiz.