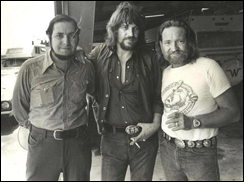 NEW YORK (CelebrityAccess) — Neil Reshen, a former manager who helped to launch the Outlaw Country sound, and who was instrumental in the careers of Waylon Jennings and Willie Nelson, died on Dec. 6. He was 75.

Reshen, a native of Queens, New York, got his start in the music industry as an accountant, doing income tax work for artists and industry figures, including RCA president Ken Glancy and Miles Davis. The connections he made with his accounting work let him segue into management and by the early 1970s, Reshen was representing a diverse lineup of artists, including aforementioned Miles Davis and Frank Zappa.

Reshen’s reputation as a pugnacious negotiator brought him into contact with Waylon Jennings, who, growing dissatisfied with the Nashville sound, sought a greater degree of artistic freedom from RCA. Reshen helped Jennings to secure that freedom, paving the way for a period that marked one of the high points of Jennings’s career as an artist.

“Neil was perfect for the part. He was like a mad dog on a leash. When he got his teeth into something, he never let go,” Jennings later wrote about Reshen.

Reshen also started managing Willie Nelson after he returned to music following his brief retirement. At that point, Nelson was better known as a songwriter than a performer, but Reshen negotiated with RCA to release Nelson from his contract and signed him instead with Atlantic and then Columbia Records, where Nelson released his seminal album "Red Headed Stranger."

“By getting RCA to agree to let Waylon do his music on his terms,” Joe Nick Patoski wrote in his 2008 biography of Willie Nelson, “Neil Reshen changed the art of the deal in Nashville, effectively breaking the feudal system where the label owned the artist, and the studio and the producer controlled the creative process.”

Despite their success however, the relationship between Reshen and both Waylon and Nelson deteriorated until both artists eventually firing Reshen, claiming that he had mismanaged their finances. Nelson sued, and was counter-sued by Reshen, claiming that at least some of his problems with the IRS resulted from Reshen's handling of his books. The case was eventually settled out of court.

Reshen managed a number of other artists over the course of his career, including The Mothers of Invention, Alice Cooper, Buddy Miles, David Allan Coe, Jessi Colter, Linda Ronstadt and The Stone Ponys, The Cowsills, Captain Beefheart, Bernard Purdie, Sam the Sham and the Pharaohs, Tim Buckley and the Velvet Underground, but eventually moved away from music, instead, focusing on representing authors, artists, such as Andy Warhol, and publishers.

He is survived by his daughters Dawn Reshen-Doty of Danbury, CT and Amber Bezahler of Los Angeles, CA, Grandson Justin Slaughter Doty of Danbury, CT, Godson Olufemi Adedeji and ex-wife Barrie Adedeji, both of New York. He also leaves behind two brothers, Bruce Reshen of Fairfield, CT and Mark Reshen, of Hollywood, FL. He was predeceased by ex-wife Patricia Reshen. A memorial service for Reshen will be held on January 7th, 2015 at the Plaza Jewish Community Chapel, 603 Amsterdam Avenue, NYC at 3 PM.- Staff Writers