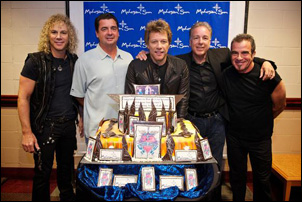 UNCASVILLE, CT (CelebrityAccess MediaWire) — Bon Jovi returned to the Mohegan Sun Arena for a May 7th concert, marking the 4th time the band has played at the venue on their current tour.

Although the band was without guitarist Richie Sambora, who checked himself into rehab last week, the rest of the band — including Jon Bon Jovi, keyboardist David Bryan, drummer Tico Torres and bass player Hugh McDonald — made the scene and were honored by Mohegan Sun for being the highest grossing act to ever play at the venue.

The tour, promoted by AEG, helped Bon Jovi achieve the rank of the top grossing act in 2010, the second time in 3 years for the band. This puts the Bon Jovi in rarefied company as only two other bands — The Rolling Stones and The Grateful Dead — have accomplished this feat.

"When you break records or pass some kind of major milestone it's really a credit to everyone, the artist of course and the crews, both ours and theirs, Jimmy Koplik and the venue itself. All get to celebrate what makes them so special and why we are ranked 4th busiest arena in the world, thanks to the Bon Jovis of the world." said Mohegan Sun's Vice President of Sports & Entertainment Tom Cantone. – CelebrityAccess Staff Writers