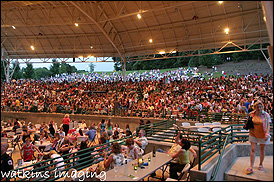 According to the Marietta Daily Journal, County Commissioners were forced to cut $353,000 from the shed's 2011 budget, leaving the venue with just $250,000 to carry it through the rest of the fiscal year, which ends on September 30th.

Some events such as the free South Cobb Arts Alliance Summer Candlelite Concert Series, which is co-sponsored by the parks department will continue as planned due to funding already being in place, the Daily Journal added.

Additionally, the amphitheatre will remain available for rental by promoters and has two such shows on the books already — a jazz festival in September and a July 16th date by rock band Foghat.

Although first conceived of in the 1970s, the 2,400 capacity shed opened its doors in 2003 after being built with $7.1 million in state and local funding. Since then the venue has hosted numerous concerts by artists such as the B-52s, Smokey Robinson and BB King, but after a high point in 2009, the number of shows per summer has dwindled with only 5 shows being staged last year. Moreover, the venue has never turned a profit and has since required more than $4.7 million in subsidies to keep it afloat.

"[The venue] was one of those things not designed to make any revenue. It was a wash to begin with. Even though we lost less money last year than we ever have, it’s one of those items if you have consistent figures of loss, you have to make adjustments." Commissioner Woody Thompson said told the Marietta Daily Journal. – CelebrityAccess Staff Writers