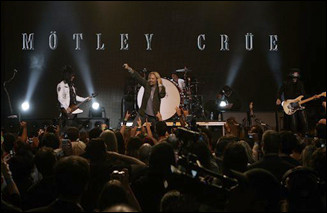 LOS ANGLES (CelebrityAccess MediaWire) — Mötley Crüe announced their Saints of Los Angeles 2009 Winter Tour, just hours before headlining a special one off performance at the historic Hollywood Palladium in Los Angeles. The Live Nation produced tour will feature special guests Hinder, Theory of a Deadman and The Last Vegas. The tour kicks off February 2nd in San Diego, CA with 29 shows throughout North America, including a date at Madison Square Garden, with the final stop in Portland, ME.

“It’s great to go back out on a tour like this where the bands are all about returning rock to the forefront of music today,” says Vince Neil of Mötley Crüe. “On top of it, we get to introduce a new band who jumped the line to arenas through the Guitar Center: On Stage contest. Just like Ozzy gave us a chance and took us on tour at the start of our career, we’re looking forward to taking The Last Vegas on the road and giving them the same opportunity.”

Hinder front man Austin Winkler said, "Mötley Crüe is a massive influence on us, and an inspiration on so many levels for what we do! Mick even played on the title track for our new album. It will be an honor and privilege for us to tour with one of the greatest rock bands ever! And we can't wait to party our asses off with them!"