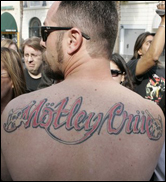 LOS ANGELES (CelebrityAccess MediaWire) — One lucky Motley Crue fan will fly to each major city across the country for a once-in-a-lifetime opportunity to cover this announcement in Los Angeles and the chance to interview the band and have it broadcast live. Fans can go here for all of the details.

The date of this "colossal" anouncement is April 15 and it will be held in Los Angeles. According to their press release, "this will by far be one of the biggest music announcements of the year!!"

The four original member band are working on the first full-length recording by the original lineup in more than a decade. According to bassist Nikki Sixx, "Tommy's (Lee, drums) kickin' ass, Vince (Neil, vocals) sounds insane and (Mick) Mars is shredding on guitars. It doesn't feel like one song is better or worse than any other. It feels so good to be excited about something you've worked on so hard… I'm so excited for you all to hear it."

The new Crue album, "The Dirt", named after the band's memoir of a few years back, is due out on July 8, with a world tour slated to commence around the same time. – CelebrityAccess Staff Writers