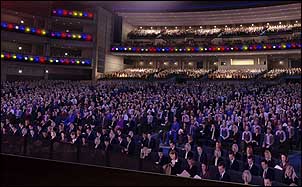 LOS ANGELES (CelebrityAccess MediaWire) — This week, AEG's new entertainment complex in downtown Los Angeles is set to open to the public with a ribbon-cutting ceremony planned for 2:30 PM on Wednesday. Participants in the ceremony will include AEG's president Tim Leiweke, the Mayor of Los Angeles Antonio Villaraigosa and Los Angles council member Jan Perry.

Anchored by the Staples Center, the complex will feature a 40,000 square foot open-air space called Nokia Plaza that will be capable of hosting live events. The plaza also features 20,000 square feet of LED displays and has been built with state-of-the-art "plug and play" accommodations for staging live broadcasts, hosting festivals, outdoor concerts and other events.

Other amenities at the complex include several restaurants, including an Wolfgang Puck, an ESPN Zone, Katsuya, the Yard House brew pub, Rosa Mexicano, a Starbucks (of course) and a New Zealand Ice Cream outlet.

Also making their home at the complex will be a number of nightclubs, including Club Nokia, a 2,300 seat live performance venue and legendary LA nightspot The Conga Room will shift operations to a new 13,000 foot space at the center and feature live entertainment Thursday – Saturday as well as hosting daily radio and television broadcasts. If this still isn't enough to occupy your time, hit the 24,000 square foot Lucky Strike bowling alley.

NARAS is working closely with AEG to develop a museum to celebrate the Grammy Awards. Planned for 2008, the museum will commemorate the 50th anniversary of the iconic awards show.

Tired after all this? Not to worry, two hotels will provide accommodations for weary revelers; the 1.15 million square foot Ritz-Carlton and the JW Marriott will rise 54 stories over the plaza.

The plaza will also have space for studios at ESPN's regional headquarters along with corporate office space for a number of other clients, including by a strange coincidence, AEG.

The calendar for the new theatre is off to a busy start. The Eagles & Dixie Chicks will christen Nokia's stage with a 6 night run from October 18th-27th.