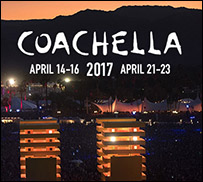 The only one missing is Justin Bieber.

Classic rock is dead. The oldsters are in the rearview mirror. Even booking Radiohead was a risk. Because, you see, Coachella is a rite of passage for SoCal teenagers, and Radiohead peaked nearly twenty years ago.

Unlike Beyonce and Kendrick Lamar.

We did not expect it to go down this way. After getting old, we expected Pete Townshend and the other survivors to rule until they died. Only last year some of them did die. You may hate the Eagles, but if Glenn Frey can expire that means you can too. You’re just one health crisis away from passing to the other side.

Unlike the youth. Who might be victims of misadventure, just ask the Hard crew, but otherwise feel they’re invulnerable.

It’s a passing of the torch. Doug Morris has been kicked upstairs and labels are run by people who were not around when the business was built and in the next ten or fifteen years it will be taken over by millennials with completely different values from their parents. Millennials believe in money, but they also believe in transparency. They cannot understand the obfuscation of the modern music business, and when they take the reins…

It can only get better.

You see the old farts are cynical and set in their ways. For far too long Coachella has been featuring reunions of bands its audience does not care about, giving slots to those who were someone once, but who are no one today, other than in their fans’ memories.

And these fans don’t go to Coachella.

One of the reasons Desert Trip was such a success was because it was upscale. You didn’t have to eat hot dogs. You were treated like an adult. And that’s what adults want, only they do not realize this lifestyle does not run the culture. It’s those without who push the envelope, who take risks. And the only risk a classic act takes is to dye their hair and get plastic surgery, believing image is everything.

But image is fading in this social media world where your warts are revealed. Honesty is on its way back.

And the honest truth about Coachella is it’s about the fans, not the lineup. They want to mingle, they want to ogle each other, take pictures and post to Instagram. Today you are the star of your own production, who is on stage…not so much.

I’m not saying that the performers are not heroes to some, just that too many look outward instead of inward. Art is not branding and money is a byproduct, whereas too many of the modern acts believe otherwise. Then again, their idea of an oldster is Mariah Carey, a woman who was the antithesis of classic rock.

So this changing of the guard is a good thing. We’re wiping the slate clean so a new generation of acts can triumph. We’re admitting rock is dead and hip-hop rules. And EDM is the building block, the core, the nougat of all these festivals. The kids want to party. The sound is just grease. Doubt me? Then you don’t remember the last time Radiohead played in the desert, when their audience continued to shrink as everybody went to the Sahara tent.

Further risks can be taken. A country act could be put on the Coachella bill. After all, they rap too. And the audience genre jumps, they listen to everything. If you wanna be cool you can book Sturgill Simpson, but the audience wants to see Thomas Rhett.

And the fact that two African-Americans are headlining proves…

That music is far ahead of the government. Where Obama is exiting and the white men are entering. African-Americans control popular music. It’s about time lilywhite Coachella acknowledged this.

So where does the festival go from here?

Rumor was we were no longer minting new headliners, that you had to overpay oldsters to play.

But then Beyonce dropped the album of the year, with videos, and Kendrick Lamar was acclaimed the most credible artist out there.

Who next, Chance the Rapper?

You’re gonna have to pay him beaucoup bucks, he can sell out stadiums all by his lonesome.

So it’s not your father’s music business anymore. They don’t make Oldsmobiles and everyone has seen the classic rock acts, they’ve been hiding in plain sight, and only a small number of people want to see revivals of the cult favorites.

And this year we’re starting over with a whole new generation.