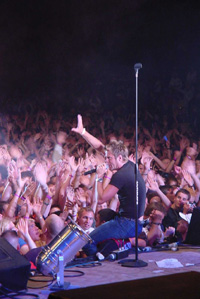 Parachute is the longest running music festival in New Zealand. With the event drawing crowds of over 21,000 to Parachute 2001, attendance figures for the 2002 festival are expected to be in excess of 22,000.

Parachute 2002 will be held at Totara Springs, Matamata. It is a drug and alcohol-free music festival, which also features top international and national seminar speakers, and a variety of sports, music and children's programs in a safe family environment.

There are 18 international acts scheduled for the festival from the United Kingdom, United States, and Australia, not to mention the 100+ New Zealand artists performing at seven different on-site venues over the 4-day weekend.

Festival Director Mark de Jong looks forward to a dynamic and productive Parachute 2002. "Parachute has now grown to be the largest Christian music festival outside of the United States, and it's exciting to see the growth and the impact Parachute is having worldwide. The festival has become a focus for the whole of the Christian music industry in New Zealand, each year seeing more bands featured, increased album sales and greater attendance."