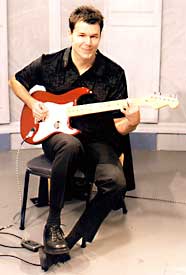 Stuart Adamson, lead singer of the 1980s Scottish pop group Big Country, was found dead in a hotel room in Hawaii on Sunday, December 16. He was 43. The Honolulu Medical Examiner said that he died of asphyxiation from hanging. Toxicology tests were administered to determine if he had taken drugs. Adamson, who had been living in Nashville for the past five years, had been reported missing several weeks ago. He has had an alcohol problem and was also missing in November 1999.

"I cannot believe I am sitting at my desk typing this," began a statement on the web site of manager Ian Grant's label, Track Records. "I have no more news other than that at present. I ask the media to leave his family alone in their grief. Please contact me at ig@btconnect.com for further information as I get it. My heart goes out to his family, Bruce, Mark and Tony. I have just lost one of the finest people I have ever worked with or been lucky enough to know. God bless you Stuart."

Big Country broke up last year. Prior to Big Country, Adamson founded The Skids. After Big Country's break-up, he formed another group, The Raphaels.