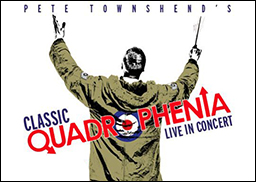 LOS ANGELES (CelebrityAccess) — Pete Townshend, a founding member and lead songwriter for the British rock band The Who, announced that he'd be performing the band's concept album Quadrophenia at a handful of shows in North America this year.

The tour will feature the entirety of the album, performed with orchestral accompaniment provided by the Boston Pops Orchestra. As well, rocker Billy Idol, and acclaimed tenor Alfie Boe will be filling out the tour.

The brief tour kicks off on Sept. 2nd in Lenox, with conductor Keith Lockhart guiding the orchestra. Subsequent shows at the Metropolitan Opera House in New York on Sept 9 & 10; and Los Angeles at the Greek Theatre on Sept 16 will be led by conductor Robert Ziegler.

As well, a portion of the proceeds form the Los Angeles show will support the charity Teen Cancer America.

"I'm thrilled to be bringing Classic Quadrophenia stateside through the month of September," Townshend said. "Melding the contrasting sounds of Quadrophenia with a symphony has been a really unique and powerful way to reach a wide audience of classical and pop music lovers alike. I couldn't be more excited to see it continue in the U.S."

The Who's historic rock opera Quadrophenia was originally released as an extensive double album in 1973 and is widely regarded as one of The Who's most notable works. The album, later turned into a feature film and theatrical production, follows an angst-ridden young man in London who creates a new life for himself as a member of the Mods, a social and fashion subculture. – Staff Writers