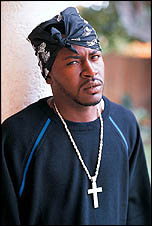 FRANKFORT, Ky. (AP) — Two rap musicians who were ordered to pay a concert promoter $146,500 in a breach-of-contract case have been granted a new trial.

The Kentucky Court of Appeals on Friday vacated the judgment against Maurice Young and Katrina Taylor, who use the stage names of Trick Daddy and Trina.

The three-judge panel said the trial judge made numerous mistakes — one being to let the jury, instead of the judge, interpret terms of the agreement between the performers and promoter Timothy Thomas.

Thomas, who was a student at Western Kentucky University, booked the rappers for a homecoming weekend concert in October 2000. His damage claim included $125,000 for lost ticket sales.

The performers said they did not go on with the show because Thomas failed to pay the $10,000 balance of their $20,000 fee. Thomas claimed Trick Daddy had used drugs and was too incapacitated to perform.

The appeals court agreed with the rappers that testimony about alleged drug use was more prejudicial than probative. There was no medical or laboratory evidence that either performer was incapacitated.