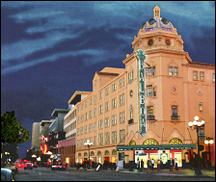 SAN DIEGO (CelebrityAccess MediaWire) — The historic Balboa Theatre, in the heart of San Diego's Gaslamp Quarter, reopened for live performances in January 2008. After a five year, $26.5 million renovation and restoration effort by the City's Redevelopment Agency, the 83 year old Balboa Theatre will once again hosts a diverse line-up of live entertainment.

"We are extremely excited that Mainly Mozart has selected the Balboa Theatre as the home of its Summer Festival. We are also thrilled that San Diego's own Classics for Kids is utilizing the Balboa for their outstanding performing arts education for young children. Additionally, we are fortunate that the Balboa will host performances by such valued community partners as the California Ballet and the San Diego Men's Chorus", states Don Telford, President & COO of San Diego Theatres.

The calendar of upcoming events at the Balboa includes:

A March 29th performance by the California Ballet, which will celebrate its 40th anniversary with "First View" – a collaboration with international guest company Opus M, direct from Munich.

April 12 will see a performance by the San Diego Men's Chorus, performing DreamGuys featuring a special guest artists including Frenchie Davis in this one night only spring concert.

April 15, 16 & 17 "Jungle" Jack Hannah, Director Emeritus of the Columbus Zoo & Aquarium, will bring his menagerie to the stage.

Tickets for the Balboa Theatre's inaugural season of shows are now on sale and available at the Civic Theatre Ticketing and the Balboa Theatre's on-site ticket office; by calling 570 – 1100, by www.sandiegotheatres.org and from Ticketmaster. – CelebrityAccess Staff Writers