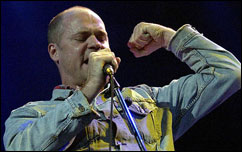 The Canadian Football League's 92nd Grey Cup Game will be held on November 21 at Frank Clair Stadium in Ottawa, ONT.
Staging of the opening ceremonies, the national anthem and halftime show are being produced by House of Blues Concerts Canada.

Canada’s own The Tragically Hip will take center field for the halftime show in the nation’s capital. The critically acclaimed The Tragically Hip has been at the heart of the Canadian music scene for two decades. The five-piece group of friends, who grew up down the road in Kingston, ONT, has sold more than 6 million albums in Canada and won 11 Juno Awards. Their newest release, In Between Evolution, is the sixth Hip record to debut at the #1 chart position, following Day For Night (1994), Trouble At The Henhouse (1996), Live Between Us (1997), Phantom Power (1998) and Music @ Work (2000).

The 16-year-old Chanté first captured the attention of the music world in 2003, when her debut single, Unpredictable, went to #1 on the radio and video charts and she was honored with the Urban Music Association of Canada Award for "Best R&B Artist."

In early 2004, she received the Canadian Radio Award for Best New Solo Artist, and in June, she released her self titled debut album which has yielded three consecutive Top 10 radio hits. She was recently awarded three Urban Music awards, garnering honours for best new artist, video of the year for Bad Boy and the fans choice award. –Bob Grossweiner and Jane Cohen