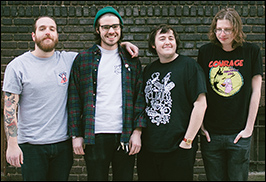 PHILADELPHIA PA (CelebrityAccess) — Philadelphia-based indie rock band Modern Baseball announced that they have canceled all of their remaining U.S. tour dates and festival appearances and are putting the band on hiatus.

In a post to their social media, guitarist and vocalist Jake Ewald attributed the decision to "mental health and our friendships." According to Ewald, the band had become a source of stress and anxiety for the members of the group and believed it was important to take a break.

"Please know that we don't take a tour cancellation lightly, and under any other circumstances we would not even consider it an option, but in this instance we have to put our health and friendships first. You've supported us unconditionally throughout this crazy ride and we could never thank you enough," Ewald wrote.

"We never really learned how to do this whole "rock band" thing the right way, but you kept coming to the shows and talking to us and assuring us that we'd figure it out sooner or later. We could not have done any of this without you. Be honest with those you love and don't be afraid to lean on them when you need to. Odds are they'll need to lean on you pretty soon too," Ewald added.

The band had an extensive schedule of upcoming shows, including the 9:30 Club in Washington D.C. on March 21rd, and World Cafe Live on March 22nd. – Staff Writers