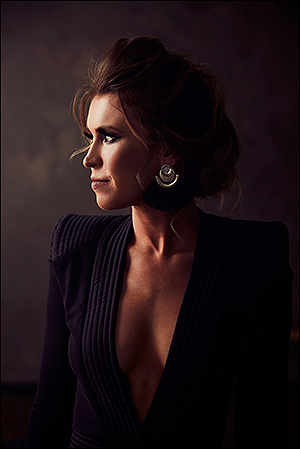 CelebrityAccess (New York, NY) – Two years ago, singer-songwriter Kate Grom was torn between practicality and being her true self. After a solo trip to France with a rented guitar, she has embraced her musical gifts and recorded Heroine. Releasing tomorrow, Feb. 24, the album was premiered exclusively with Popdose today. She will also play Rockwood Music Hall’s Stage 2 on Saturday, Feb. 25.

"Kate Grom [delivers] her debut album, Heroine in a meaningful and well-seasoned fashion," the outlet said. "The New Jersey native may be a first-timer in releasing an album but her efforts are aided and abetted by no less than a producer like Stewart Lerman (who, if you don’t know, has worked with the likes of Elvis Costello, Marshall Crenshaw, Patti Smith, Shawn Colvin and a host of other luminaries) and a guitar virtuoso like Steuart Smith (currently sharing lead guitar duties with Joe Walsh in The Eagles, but has also worked with Rodney Crowell, etc.). That kind of formidable core only strengthens the notion that already, Ms. Grom is a force to be reckoned with."

In 2014, Grom experienced a transformative time finding her musical voice. She was pursuing her dreams in New York, but felt a restlessness she couldn’t ignore — she traveled alone throughout France with a guitar, and has Heroine to show for her adventures; a product of breaking out of her comfort zone.

Produced by two-time Grammy Award-winning producer Stewart Lerman, Heroine is rustic and refined, replete with lonesome pedal steel guitar and moony atmospherics. The songs display “a folk truth” according to No Depression, simmering while Grom’s vocals exhibit a fragile power — filled with longing and a soulful melancholy that’s both stirring and comforting. The album’s lead single, “Tricks,” premiered by Atwood Magazine, is “an enchanting display of the Americana songwriter at her finest,” while showcasing "short and heavy guitar licks that moan for unresolved emotions," and “Whiskey Eyes” has “a subtle power and manages to pull your heartstrings,” Glide Magazine said. The album has also received praise from The Boot, when premiering “Whistle Cry.”

The title of the nine-song collection, Heroine, is inspired by the Nora Ephron quote, “Above all, be the heroine in your life, not the victim.” Core to Grom’s music is a personal approach to lyric writing, with resonant messages and music that reflects the rural beauty of her time growing up on a farm in Frenchtown, New Jersey. She explored music through church choir and women's choir, as well as formally through the Moravian chamber choir and later at Belmont University in Nashville.

Lerman has worked with Willie Nelson, Sharon Van Etten, Elvis Costello, Neko Case and Patti Smith, among others. The musicians playing on the record are world-class players who have worked with artists including Bob Dylan, Emmylou Harris, My Morning Jacket, Brandi Carlile, Lana Del Rey and the Eagles.

Up next, Grom will tour in support in the album; a new chapter in embracing a new era as an assured artist. Her first show is on Saturday, Feb. 25 at New York’s Rockwood Music Hall (Stage 2). The show begins at 7 p.m. and tickets are $10, with a copy of the new album included in the ticket price. More information is available at Ticketfly.