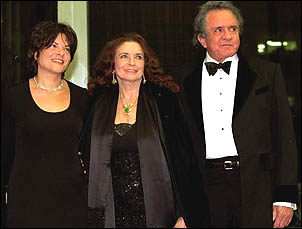 (CelebrityAccess News Service) – In her first in-depth national television interview since her father's death, Rosanne Cash, the eldest daughter of Johnny Cash, will share memories of her father on Larry King Live on November 11. Brother John Carter Cash, Dwight Yoakum and Travis Tritt, among others, will join her on the show to discuss the influence of the legendary Johnny Cash. Larry King Live airs 9:00-10:00pm Eastern time on CNN.

The death of her father on September 12th has made their duet, "September When It Comes," even more profound. Written by Rosanne Cash with John Leventhal (her husband and producer), the song appears on her March 2003 release Rules of Travel, an album recorded as she witnessed her dad's declining health and dealt with the inevitability of losing him.

When Leventhal suggested she record "September When It Comes" with her dad, Rosanne Cash was at first reluctant. "I thought it might be too intense because of the subject matter and also my relationship with him is too precious, and I didn't want anyone to think it was a gimmick," she told the Los Angeles Times this past spring. But after further consideration, she warmed up to the idea and asked her dad to record the song. "He told me he would have to read the lyrics first," she says with a laugh.

The next time Rosanne visited her father, they went over to the little studio he had in the woods. With John Carter Cash at the controls, Johnny Cash started recording his track. "He was getting into doing it," she recalls. "And then he was calling for more takes: 'No, let me try that part again!' When we finished, I said, 'Dad, it's beautiful, you sound great.'"

His response? "He said, 'No, now you take that back to New York and play it for John, and if it's not good enough, then I will fly to New York and I'll re-do it for you.'" Of course, no further recording was needed. The vocal was just as Leventhal had imagined when he suggested the duet – classic Johnny Cash.

The resulting song is a sparse, stunning reflection on mortality, the core of an album that numerous critics have called one of the year's best. In a style befitting both father and daughter, "September When It Comes" is as uplifting as it is somber:

"When the shadows lengthen

And burn away the past

A place where I can rest

When this begins I'll let you in

September when it comes"

NEW YORK (AP) — Courtney Love has admitted to using heroin in the past, but says she doesn't have a problem now, despite being charged recently with drug possession.

"I want to make one thing clear right now. I do not take narcotics," Love tells Us Weekly magazine for its Nov. 17 issue. "I have taken prescription pills, and I went to rehab once. I take Xanax that is prescribed to me, but practically everybody does that nowadays. But I do not take street narcotics."

Los Angeles County child services workers took the girl away from Love, who was admitted afterward to a psychiatric ward for making a suicide threat, which she says was a joke. On Oct. 28, Love was charged with felony counts of possessing hydrocodone and OxyContin in connection with the overdose.

Now, Love says, "there is no fight" to regain custody of her daughter, who's staying with Love's stepfather and sister.

"She is back and doing great. We are in the middle of a reunification process," she says. "I have visitation time every day. … My kid loves me, and I love my kid. She's been scared, but she's taking it like a champ."

"Never in my life have I ever experienced anything as crazy as this," Combs said Sunday at a news conference. "It was a beautiful experience."

The producer-rapper said he had raised $2 million since announcing in September that he would run. The money will be divided among two children's charities and New York City public schools.

Combs said he gained support from an NBC reporter covering the race who ran with him, as well as from children in Harlem who cheered him on.

"I definitely wanted to stop," Combs said. "This is definitely a life-changing experience for me because I did not stop."

Known on the course simply as No. 30,972, Combs kept a respectable pace for much of the 26.2-mile race. As he crossed the finish line, he raised both arms in triumph.

Combs shed about 15 pounds in training, and developed severe tendinitis in his right knee.

"Twenty-six miles isn't a publicity stunt," he said after the race.

NEW YORK (AP) — Despite his debilitating stroke, Luther Vandross has been able to keep up his spirits throughout his ordeal, says the singer's personal assistant.

"His sense of humor is definitely intact," Max Szadek told The Associated Press in an interview this week. "Anyone would be depressed going though this, but he does bring a certain levity to the table with it."

Vandross, 52, suffered a life-threatening stroke in April. After some setbacks, he was released from a hospital to a rehabilitation center this summer and has been making progress, Szadek said. He can sing, walk with assistance — and will even correct your grammar.

Yet, Szadek said, Vandross is a long way from being fully recovered.

"Day to day, there's always going to be an inconsistency. That's the nature of the healing," he said. "So he is singing, but I don't want to mislead people that he's ready to perform next week. … I think it's important for people to know that he is making progress, but it's slow going and it's steady."

Among the tasks Vandross is working on is trying to improve his short-term and long-term memory.

"I think he's performing to the best of his abilities, but it was a very serious injury," said Szadek.

"I think he was showing people he was really at a pinnacle as a performer," Szadek said. "This performance is iconic in a way, because it really features everything he was about."

The network said Thursday it had inked Miller to a multiyear deal for the political chat show, set to begin in January.

Miller said he would work four nights a week at 9 p.m. ET.

He spent six seasons on NBC's "Saturday Night Live" before launching his own HBO show, "Dennis Miller Live," winning five Emmy Awards. He drew mixed reviews for his work in the "Monday Night Football" booth, leaving in 2002 when John Madden was hired.

Miller, who was considered for a prime-time talk show on MSNBC last year before Phil Donahue was hired, said he was looking for work and intrigued by the CNBC idea after being approached by Jeff Zucker, NBC entertainment president.

"I have the same approach I would use if I were crossing a prison yard late at night," Miller said about his career in an interview with The Associated Press Thursday. "I zigzag to stay ahead of everyone."

Zucker said it was the next logical step in Miller's career.

"Having Dennis Miller return to the NBC family is one of the most exciting things to happen to us in years," he said.

A few months later, Miller was the opening act at a Bush fund-raiser in California, earning him a ride on Air Force One and the president's limousine. He said of Bush's Democratic opponents: "I haven't seen a starting nine like that since the '62 Mets."

There was talk among some Republican political strategists of running Miller as an opponent to California Sen. Barbara Boxer.

"Even if people don't agree with him, they'll find what he's saying interesting," she said. "Our audience isn't looking for someone to tell them how to think."

CNBC has recently begun making moves to boost a lackluster prime-time lineup that can't match the ratings strength it had in the 1990s with Geraldo Rivera. Brian Williams' nightly CNBC newscast will end next year when Williams takes over from Tom Brokaw at NBC's "Nightly News."

Currently, CNBC airs "The Capital Report" at 9 p.m. four nights a week. Maria Bartiromo's news show has the time slot on Monday nights. Thomas-Graham said CNBC will continue to look at other programming ideas, though they won't include scripted comedies or dramas.

Miller's show will be taped each night at NBC's studios in Burbank. Terms of his deal were not disclosed.

The singer will write the theme music for ABC Sports' NBA coverage and will star in the network's NBA promotional campaign "Can't Get Enough."

Timberlake also will work as a special correspondent on the NBA, the network announced Thursday.

"This provides a unique integration of sports and entertainment, and Justin's interest and enthusiasm not only in the NBA, but in all sports, should help provide our broadcasts with a new, fresh approach," said Michael Pearl, senior vice president and executive producer of ABC Sports.

Timberlake appeared on TNT's "Inside the NBA" with Magic Johnson, and has taken part in the NBA All-Star weekend the past two years. Timberlake's hit songs include "Rock Your Body" and "Like I Love You."

ABC begins its second season of NBA coverage with a Christmas Day doubleheader.

Tyler, 24, and Buckner, 27, tied the knot Saturday on stage, according to an MGM Grand hotel official. A marriage license for the couple was filed at the Clark County Recorder's Office.

Her father, Aerosmith frontman Steven Tyler, reportedly told the audience: "Hey Vegas, I need a favor, my daughter wants to get married tonight. Can I get a witness?"

It's the first marriage for both, according to People magazine's Nov. 10 issue.

NEW YORK (AP) — Comedian George Carlin has agreed to terms for a new book, "When Will Jesus Bring the Pork Chops?" an essay collection to be published next year by Hyperion.