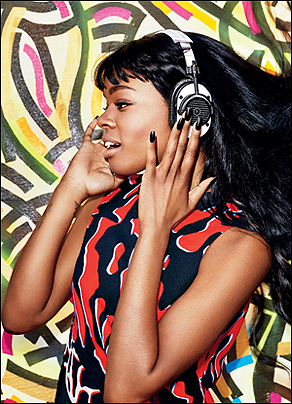 (CelebrityAccess) On November 6th, in partnership with management company Prospect Park, Azealia Banks unexpectedly unleashed her debut album onto the world, “Broke With Expensive Taste.” The album is filled with innovative blends of house, trance, trap, and R&B. Although she claims that the album was started a year and a half, it sounds remarkably current. The quality of the music is what has allowed her to have a rare second chance in a cutthroat industry.

The highly anticipated full-length quickly gained international praise and soon charted on iTunes in 50 different countries, entering the Top 10 in 15 countries. “Broke With Expensive Taste,” or #BWET as it was popularly being referred to when trending on Twitter, reached #1 on the U.S iTunes Hip Hop Charts, #3 in the U.S Album Charts (right behind Taylor Swift and One Direction), #1 in the U.K iTunes Alternative Charts, #6 in U.K iTunes Album Charts, #1 in the Canadian iTunes Hip Hop Charts and #4 in the Canadian iTunes Album Charts. It also achieved impressive chart status across Europe, South and Central America, the Caribbean, Asia and Australia, all on the first day of release.

Already being tipped as a serious “Best of 2014” contender – with the general consensus that this album was well worth the wait – one week after “Broke With Expensive Taste” debut, Azealia Banks premiered the official music video for her current single “Chasing Time.” The new video, directed by Marc Klasfeld, made its worldwide premiere on November 13th via MTV, MTV2, MTV Jams and MTV Hits. “Broke With Expensive Taste” is also the third most streamed album this week on Spotify as rave reviews continue to pour in from critics worldwide.

Azealia Banks also announced her partnership with Soundcloud, BitTorrent Bundle and MTV for a very special remix opportunity. Music fans and producers worldwide will have the ability to remix Azealia Banks’ new single “Chasing Time” for a chance to be heard and handpicked by the star herself and win $10,000. The chosen track will be the first official remix release for “Chasing Time.” She can be called a lot of things but one thing that she can’t be labeled is predictable. “Broke With Expensive Taste” is an open world look at what for too long has been a closed genre and like her or not, “Broke With Expensive Taste” is a true alternative to artists like Nicki Minaj and Iggy Azalia. She is plowing a lane of her own.