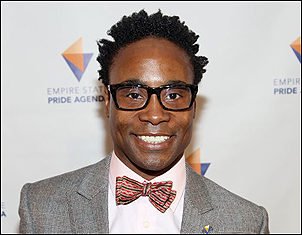 NEW YORK (AP) — "Oh, I like those shoes. Where did those shoes come from?" the Tony Award winner asks nicely.

When told that the footwear in question is really just cheap and unremarkable, Porter jumps in. "Listen, inexpensive does not mean not nice."

Porter has good reason to be so generous with compliments these days. He's celebrating his anniversary in the hit musical "Kinky Boots" and is about to release a new CD of Broadway standards.

The 10 lushly orchestrated songs on "Billy's Back on Broadway" are a soundtrack of empowerment, encouragement, hope and enlightenment. Once those themes came to Porter, "it kind of wrote itself," he says.

There's "Everything's Coming Up Roses" from "Gypsy," ''Don't Rain on My Parade" from "Funny Girl" and "Luck Be a Lady" from "Guys and Dolls." The style, title and artwork are all a nod to Sammy Davis Jr. But the order and meaning are all Porter: "On the Street Where You Live" is no mere love song — on Porter's album, it's a bittersweet song about surviving the AIDS crisis.

Porter recorded the songs — including a duet with Cyndi Lauper — while playing Lola, the soul of "Kinky Boots," Lauper's musical about a British shoe factory that retrofits itself into a maker of drag queen footwear. He calls it "the role of my life."

Porter, who dances in 6-inch heels, has faced down some backlash, particularly during the Macy's Thanksgiving Day Parade, when the toned and fierce "Kinky Boots" drag queens attracted some vitriol on Twitter. Porter notes that no one criticized the safe, overweight drag queen playing Miss Trunchbull in the parade's "Matilda" segment. "It was shocking and not," he says ruefully.

Porter, who spent 13 years away from Broadway after finding his career stalling, now loves every minute here. As for the album, he's been thoughtful about every single detail. (It's no coincidence that "Luck Be a Lady" is the track that comes right after he sings with Lauper.) He recently discussed the show and CD with The Associated Press.

AP: Congratulations on your anniversary. How long will you stay in the show?

Porter: As long as I can. Until something better comes along and that's a really tall order. I've gotten really picky in terms of where I'm going to go next as a performer. It's not going to be just anything. You know what I mean? The role is too good. The experience is too complete. The paycheck is fierce. I didn't shop for 13 years. I like clothes and cute things!

AP: Did you even flirt with leaving when your contract was up?

Porter: My manager will tell me to say, 'Yes, I did think about leaving.' The truth of the matter is: not really. It doesn't give you much negotiating power when you say, 'Oh, I'm staying forever!'

AP: As the show's star, do you find yourself becoming a political activist?

Porter: I always have been, in a way. Just by the nature of making the choice to be true to who I am, I'm political. Sometimes that's all you need to do: Show up and be black, gay and Christian in America and actually say it out loud. And refuse to let anything or anybody take that away from you.

AP: On the CD, what was a rule you followed?

Porter: "I Got A Lot of Living to Do." The first line is 'There are girls just ripe for some kissin'.' Unless I can change that to 'There are guys just ripe for the kissin,' I'm not interested in that for my own personal storytelling.

AP: Why did you want to sing with Lauper?

AP: What's the significance of singing "Happy Days/Get Happy" with her?

AP: You've put so much care in this album. You secretly don't want people to put it on shuffle, don't you?