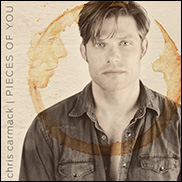 NASHVILLE (CelebrityAccess) — Chris Carmack is not a country singer. He just plays one on TV.


But along with his voluminous (and critically-acclaimed) acting credits, Carmack IS a musician, a triplethreat singer, songwriter and facile guitarist whose roots run deep into his childhood with a breadth of influences that weave a range of styles into a distinctively smooth but emotionally potent sound. Listen to his debut EP, PIECES OF YOU , and you'll hear strains of the rock, pop, blues, jazz and Americana that Carmack has immersed himself in since he picked up saxophone in the fourth grade. You’ll also catch a few touches of country — or at least the rich storytelling ethos of country music — a style he has become increasingly familiar with while living in and performing on ABC’s “Nashville,” where he portrays Will Lexington, an openly-gay heartthrob country singer.


"Music came first, before the acting," says Carmack who cites his primary creative sources are icons such as B.B. King, Buddy Guy, Stevie Ray Vaughan, John Mayer, Ray LaMontagne and Amos Lee. "I find that when I write songs it's through an exploration of myself. It’s very therapeutic. If I'm feeling deep emotions about relationships I'm in or things I'm witnessing, writing and singing these songs helps me deal with it."


His music has certainly resonated with critics. Rolling Stone called Carmack's set the “Best Blue-Eyed Blues" at the 2015 CMA Music Festival and celebrated his "greasy guitar licks and soulful, yearning voice." Billboard, meanwhile, declared that "Carmack showed off his impressive vocal and guitar chops." And then there was the simple sentiment of country guitar god Vince Gill, who dubbed Carmack no less than "a wicked good guitar player."


Playing more than songwriting was the initial allure for Carmack. Raised in Maryland, he was in second grade when he began pestering his parents for a saxophone — inspired, he confesses, more by Lisa Simpson than, say, John Coltrane. He finally got a horn when he was in fourth grade and took private lessons before joining the jazz band in high school. Carmack also started playing guitar as a teenager and delved into his first attempts at songwriting.


"I wrote poems and started scribbling songs," he recalls. "I wrote funny songs to make people laugh, and I occasionally would write a romantic song to a girlfriend to make her swoon."


Carmack, who was bitten by the acting bug as a freshman in high school, studied at New York University's Tisch School of the Arts, which led to an active, high-end modeling career. Acting was still the focus, however, and Carmack headed west to Los Angeles, landing a steady array of film and TV appearances starting with the inaugural season of Fox TV's “The O.C.” and leading up to his 2013 casting in “Nashville.” But even as those careers exploded his guitar and writing pad were constant companions.
"I found myself having a lot of downtime and really focused on getting better (at music)," Carmack remembers. Blues guitar became a particular interest, and a breakthrough was meeting Scotty Wilson, an older blues player from Mississippi who was busking on Venice Beach. "He had this big white beard and played the most authentic blues I'd ever heard; it was like he came out of a place in history," Carmack recalls. Wilson offered to teach him, and Carmack jumped at the opportunity, even putting together a band with Wilson that played around Los Angeles.


"I learned a lot about feeling music and playing in the moment and listening to everyone else in the band," Carmack remembers. "That was what really got me the bug for playing guitar and being a frontman. I started putting my own groups together and performing in empty bars all over town, and it was a lot of fun. It kept me sane between acting gigs."


There's no question, however, that “Nashville,” and moving to Nashville for the filming, was an opportunity for Carmack to not only show off his musical skills but to also further develop all aspects of his craft.


"It really inspired me to step up my game," Carmack acknowledges. "When I was in Los Angeles I thought I was pretty good. When I came to Nashville and suddenly was immersed in an entire culture of generational musicians, people who are born into these music legacies and grow up around music and can play many different instruments — much better than I can — I spent a lot more time trying to hone my songwriting, my playing, my voice and my style. I don't think I would have ever worked as hard at it if I hadn't come to this town."
Proof of that is certainly out there to hear – on five THE MUSIC OF NASHVILLE soundtracks and certainly on PIECES OF YOU . From the smooth, funky groove of "What Has Changed" through the gritty country-blues-soul of "Can't Do It Again" and the gentler strains of "Always Mine," "Being Alone" and the title track, the EP's five songs offer an impressive sampling of Carmack's range and gift for turning personal experiences into universal sentiments. His guitar playing is a force throughout each of the tracks, but so is his taste; the playing serves the song, never eclipsing the arrangements but rather accenting and lifting each tune to a higher plane through his solos and fills.


It should be noted, too, that Carmack's main guitar is one he made himself, by hand from alder wood and built with the help of a friend. "I like to think I'm a handy guy, and I like to learn how things work," he explains. "I didn't expect the guitar to sound great, but it did so I'm using it. It's an excellent opportunity to have a more intimate relationship to the guitar by playing one I built."


Pieces Of You, meanwhile, offers listeners an opportunity to begin building that same kind of relationship with Carmack as a musician. Consider it a warm introduction — passionate and openhearted and not leaving anything in reserve — and he promises there will be a lot more where that came from. "I've got a lot more songs I've written," Carmack notes. "I have a lot to say and a lot more I want to do, and I'm anxious for people to get to hear that. This isn't some hobby; music means the world to me, and I'm serious about making it the best it can be."

Tour dates have not been announced for 2016